The West Wing: "Take Out the Trash Day" 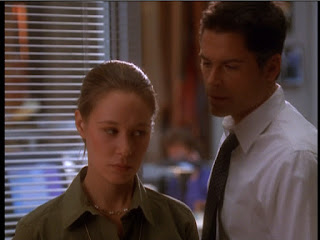 In “Take Out the Trash Day”: the West Wing staff debate how to best respond to a controversial sex education study, the long-gestating hate crimes legislation is about to be signed, Josh and Sam meet with an appropriations subcommittee intended to expose Leo’s drug abuse history, and Toby battles a group of congressman over the Public Broadcasting Service.

This is an odd episode, which feels partly recycled and at the same time partly redundant. The sex education study only really serves two purposes: firstly, it adds some easy comedy moments, and secondly it puts something on the table with which the characters can bargain with to avoid a lengthy and messy hearing about Leo’s alcoholism and drug addiction.

James Handy played Congressman Joseph Bruno, who meets with Sam and Josh to discuss the possible hearing into Leo’s scandal. He returns in Season 3’s “Bartlet for America”. Handy had previously played Estevez in Bird (1988), Milton Briggs in Arachnophobia (1990), and guest starred in multi-episode arcs on NYPD Blue, Alias, Melrose Place and Profiler (1997-98). Bruno’s conversation with Sam and Josh is a highlight of the episode. Sharp, intelligent, and sensible, he not only gives both of them a well-earned piece of his mind, but also reminds the audience that not every Republican in the series is going to be a moustache-twirling villain.

Despite this, the scenes feel a bit like mopping up: the dramatic part – Leo’s public admission – has already happened. This feels like Sorkin tidying up loose ends so that he can move on to something else (which he does, as the series’ next major story arc kicks off in “20 Hours in L.A.”).

Meanwhile Toby takes a meeting in order to defend the Public Broadcasting System (PBS) from congressmen wanting to make cuts to its funding. The idea for subplot came from Patrick Caddell, who asked Aaron Sorkin the question ‘why the hell are we funding public TV for rich people?’(1) The scenes are amusing enough, but they come one episode after Toby has had near-identical meetings regarding cutbacks to the NEA. It’s odd to watch the series repeat itself so brazenly, or (perhaps more likely) absent-mindedly.

Larry Sullivan and Sheryl Arenson play Hamlin and Lock, the congressmen who meet with Toby. Sullivan would subsequently play Dan Pierce in the TV series Commander in Chief and Officer Akers in CSI: Crime Scene Investigation. Sheryl Arenson has only appeared one other time – in the 2009 film Angus Petfarkin Paints his Masterpiece.

A more interesting story development than PBS or Josh and Sam on Capitol Hill is the discovery of who leaked Leo’s medical records to Larry Claypool in the first place. It’s answered here. At first it seems to be another subplot about the Vice-President – then the story snakes around and catches us by surprise. Sam calls in the offending White House staffer, Karen Larsen, and fires her on the spot. His carefully controlled rage is outstanding. This is one of the strongest scenes Rob Lowe has been given so far. Then, as a counterpoint to that scene, Karen Larsen is brought in front of Leo McGarry himself and is quietly forgiven and sent back to her desk.

It is a wonderful scene, bringing with it not only a wonderful presentation of Leo’s personality but also one of the most oddly effective explanations of alcoholism ever presented in film and television. Leo is asked why he’d want ten drinks at a time instead of one. His answer? ‘Because I’m an alcoholic.’ It’s a response that is simultaneously utterly nonsensical and as clear and as understandable an answer as you could ever expect. This is one of my favourite Leo McGarry scenes for the entire series. Leo’s decision to reinstate Larsen earned Aaron Sorkin several responses from the real West Wing. ‘I got three e-mails from the White House,’ he told Entertainment Weekly, ‘saying “That girl’s ass stays fired!”’(2)

John Spencer received a similar reaction, later noting ‘this woman came up to me and said, “You know what? You must not hire that woman back. If she did this, she will be doing it again.” I was so taken with this woman worrying about me. She thought I was being a little too optimistic about the second chance he gave her. But Leo is a man who’s been given a second chance himself.’(3)

Leo tells Karen that he hasn’t had a drink in six and a half years. There is no reason to assume this was intended to be a lie when this episode was produced, but events presented in Season 3’s “Bartlet for America” show reveal that Leo is not in fact telling Karen the truth. These things happen when the writer is making stuff up as he goes along.

Karen Larsen was played by Liza Weil. She had previously appeared in the films A Cure for Serpents (1997), Whatever (1998) and Stir of Echoes (1999). Following her appearance in The West Wing she played Samantha Sobriki in three episodes of ER (2000-02) before being cast as Paris Geller in the long-running drama Gilmore Girls (2000-07).

Ray Baker played Jonathan Lydell, the father of murder victim Lowell Lydell. Linda Gehringer played Jennifer Lydell, Lowell’s mother. There is a lovely inversion played here between C.J. and the Lydells: the episode leads us to believe that Jonathan Lydell is ashamed of his dead son’s homosexuality, only to turn 180 degrees at the last minute. Mr Lydell is proud of his son, and has been ominously quiet because he can no longer tolerate the Bartlet administration’s weak position on gay rights in the military. It is still a subplot about homophobia – it’s just suddenly facing in an unexpected direction. The issue of gays in the military, and the real-life ‘don’t ask, don’t tell’ policy, is revisited in “Let Bartlet Be Bartlet”.

The episode was directed by Ken Olin, best known for his role as Michael Steadman in thirtysomething – opposite The West Wing’s own Timothy Busfield. Like many American TV actors Olin started directing episodes of his own show, moving on to direct for Judging Amy, Freaks and Geeks, Felicity and Eli Stone. He was a director and executive producer on J.J. Abrams’ espionage series Alias from 2001 and 2005. Ultimately Ken Olin directed three episodes of The West Wing: “Take Out the Trash Day”, “The White House Pro-Am” and the second season’s “In This White House”. Since then Olin has continued to divide his time between directing, acting and producing, more recently for the drama Brothers & Sisters, for which he has undertaken all three roles.

Same smaller pieces of trivia worth noting: the small subplot regarding a town’s plan to scrap all laws except for the Ten Commandments was derived from an actual news story of an Alabama town planning to do exactly that.

The coffee cup Martin Sheen drinks from in the Oval Office bears the “Think TV” slogan from Dayton Ohio’s WPTD-TV – the local television station from Martin Sheen’s home town. The cup was sent to him by his brother, John Estevez, who was the station’s corporate development manager.