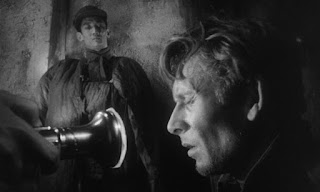 In 1959 the British Army hired documentary filmmaker John Krish to direct a training film that would educate soldiers on what to expect if they were captured by their enemies. To help him develop the material the Army provided Krish with extensive reports on interrogation and brainwashing techniques used by the Chinese and North Koreans during the Korean War.

At the time Krish was tiring of making nothing but documentaries and training films, and was keen to segue into dramatic filmmaking. To this end he convinced the Army brass to let him make their training film as a short narrative feature, the idea being to better engage the soldiers watching by giving them a bit of a story at the same time as informing them of enemy interrogation methods. Once the film was completed Krish hoped to use it as a calling card to film producers around the United Kingdom. Sadly his adaptation of Chinese-style interrogation was too effective. Horrified by the effect the film might have on soldier morale, the Army reclassified the film as secret and refused to show it to anybody for 45 years.

Captured is now available via the British Film Institute's excellent Flipside DVD series of under-appreciated films, and it turns out to be a great little movie.

The film is based around a squadron of British soldiers captured by the North Koreans during the Korean War. It begins showing how subtle manipulation and subterfuge by the prison camp's commander cause rifts to develop between the individual prisoners, until one soldier is easily picked out from the crowd and coerced into providing details on an intelligence officer recently captured from behind the front line. Once that information is in hand, the commander then applies it to breaking the intelligence officer with a combination of deception, mind games and physical torture.

This is not a graphic film, but for 1959 it's remarkably direct and frank. One extended sequence of water boarding is so effectively realised that it could have been shot within the last 10 years. It's not a surprise that the Army restricted access to the film: potential recruits seeing what goes on in this film would have run a mile.

It's all heavily laced with propaganda, of course, but it's leavened with realistic performances and a strong attention to detail. If anything it most feels like a short, black and white contemporary of The Great Escape - only with realistic torture and no one managing to escape. As it's ostensibly a training film Captured is only 62 minutes long, but in this case its length works to its advantage: it gets in, tells a genuinely entertaining story, and gets out again. Not many war movies can claim to be this tightly directed and edited together.

The cast, which includes Alan Dobie, Ray Brooks and Wilfrid Brambell, is uniformly excellent, and Krish's screenplay crackles with an unexpected wit. It may have taken audiences almost half a century to be able to see this film, but now that we can it can properly take its place as a valuable addition to the ranks of Britain's best war films.
Posted by Grant at 4:55 PM