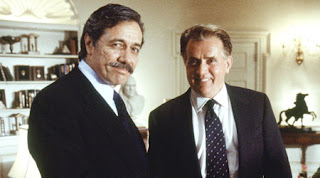 In “The Short List”, President Bartlet has the chance to make a mark in history by nominating a Supreme Court Justice, and an ambitious Republican congressman on the House Government Oversight Committee makes a shocking allegation against the White House staff – with severe repercussions for Leo.

First, a note of explanation. The United States Supreme Court is the highest judicial body in the USA, and consists of a Chief Justice and eight Associate Justices. All nine positions are nominated by the President and confirmed with a majority vote of the Senate. Once appointed, Justices hold their positions for life: which means opportunities to nominate a new Justice come few and far between, and partisan politics being what it is it is a monumental struggle for an Administration to get the Justice appointed that they want. So the opportunity for the Bartlet Administration to nominate a new Associate Justice is a big deal. It is, in fact, the single most significant act Bartlet will perform in his first year in office.

The staff have a juggling act to perform: they want to get the best Associate Justice that they can, one who will uphold similar beliefs to the Democratic Party, but at the same time they need a nominee that the Republicans who hold power in the Senate will actually agree to confirm. Mason Adams played retiring Supreme Court Judge Joseph Crouch. Adams famously played Charlie Hume in the popular sitcom Lou Grant. He also appeared in The Omen: The Final Conflict, F/X, Under Siege and From the Earth to the Moon. The West Wing marked Adams’ second-last dramatic performance – his final role was Mr Hoyt in the Oz episode “Exeunt Omnes”. Mason Adams died in April 2005, aged 86.

It is through Bartlet’s conversation with Crouch that we finally get some solid backstory on the President’s first year in office. By Crouch’s account, Bartlet ran a vigorous left-wing campaign, only to shift to the safety of the centre once in office. This process, and Bartlet’s own fear of risking the ire of a hostile senate, plays out more fully as Season 1 progresses.

Ken Howard played the role of Peyton Cabot Harrison III, Bartlet’s first choice for Associate Justice. Howard was the star of the sporting drama The White Shadow, which ran from 1978 to 1981. From 1984 to 1986 he appeared on Dynasty and The Colbys as Garrett Boydston. After appearing on The West Wing he played the role of Max Cavanough in Crossing Jordan from 2001 to 2005. In 2009 he was awarded an Emmy for Outstanding Supporting Actor in a Miniseries or Movie, for Grey Gardens.

While Aaron Sorkin knew he didn’t want Harrison to be Bartlet’s final choice, he also knew he didn’t want Harrison to be brought down or tarnished by some obvious factor such as a sex scandal. Speaking to Brill’s Content Sorkin said: ‘I didn’t want this guy to have done anything wrong except that I was intrigued by [Robert] Bork and those who agree with Bork that the Constitution does not provide for a right of privacy, that the right simply doesn’t exist. Not so much because of Bork’s contention that Roe v. Wade was based on faulty legal thinking but more because I think privacy is huge.’(1)

In developing the story and teleplay Patrick Caddell researched the privacy arguments for Sam’s argument with Harrison, Dee Dee Myers found a way for Harrison’s opinions in privacy to be revealed (the unsigned note), and Lawrence O’Donnell developed strong resumes for both of Bartlet’s potential Justices. It was during the production of this episode that O’Donnell received a promotion, rising up from the writing pool to become executive story editor. He was appointed co-producer at the start of Season 2, and a full producer from “The Lame Duck Congress” to “Two Cathedrals”. After a break of two years O’Donnell returned to act as consulting producer on Seasons 5 and 6, before becoming executive producer for Season 7.

Sorkin assembled the final script of “The Short List”, condensing what would normally be weeks – if not months – of discussion and debate into a few short days. ‘The more you compress time, the more the heat goes up,’ he explained.(2)

“The Short List” is the first West Wing episode for which Dee Dee Myers received a story credit. She was initially hired as a political consultant, and remained with the series from its inception to Season 5’s “Disaster Relief”. Myers most famously served as White House Press Secretary for the first two years of the Clinton administration. She was, at the time, both the youngest Press Secretary in US history, as well as the first woman. Her experience and advice on The West Wing was critical in the development of C.J. Cregg. Since leaving political life she has worked as a contributing editor to Vanity Fair, Los Angeles bureau chief for the New York Times, and a professional lecturer. Her non-fiction book Why Women Should Rule the World was a New York Times bestseller.

With Peyton Harrison out of the picture Bartlet looks to Hispanic judge Roberto Mendoza, played by Edward James Olmos. Born in 1947, the Mexican-American Olmos grew up in Los Angeles. After early dalliances with baseball (he was a Golden State batting champion) and rock music, Olmos attended East Los Angeles College. He said: ‘The first acting class I took was at my first year in College. I was seventeen years old and it went hand in hand with the music stage work that I was doing and the dancing that I had done before I started singing.’(3)

He played the narrator in the play Zoot Suit, which moved to Broadway and ultimately earned Olmos a Tony Award. His early notable film roles included Wolfen, The Ballad of Gregorio Cortez and Blade Runner. From 1984 to 1989 he played Lieutenant Martin Castillo on the hit police series Miami Vice, for which he received a Golden Globe and an Emmy in 1985. He also received an Academy Award nomination for Best Actor for his role as high school teacher Jaime Escalante in Stand and Deliver (1988).

Olmos actively campaigned the production office for the part of Mendoza, despite it only consisting of one major scene and a walk along a corridor. It was originally intended to feature Mendoza as a recurring character, but he only appeared in one other episode, “Celestial Navigation” (we will get to why when we look at that episode).

Holmes Osborne played Congressman Peter Lillienfield. Osborne had previously played George Low in the TV miniseries From the Earth to the Moon, and had guest starred in ER, Family Matters, Brother’s Keeper and The Norm Show. He had also appeared in such films as That Thing You Do (1996), Affliction (1997), Election (1999) and The Mod Squad (1999). Osborne would later play President Robert Maxwell in the short-lived series Seven Days, Mayor Littles in Invasion and Eddie Darko in the 2001 cult film Donnie Darko. Despite setting the ball in motion on Leo’s drug addiction storyline, Lillienfield does not appear in The West Wing again.

The episode was directed by Bill D’Elia, a successful writer/director and creator of the television series Judging Amy. D’Elia had previously directed episodes of Law & Order, Doogie Howser M.D., Beverly Hills 90210, Northern Exposure and Picket Fences. He would return twice to direct The West Wing, in “Guns Not Butter” and “The Warfare of Genghis Khan”. Subsequent to this episode, D’Elia directed episodes of The Practice, Boston Legal, Miracles, Grey’s Anatomy and Glee, among others.