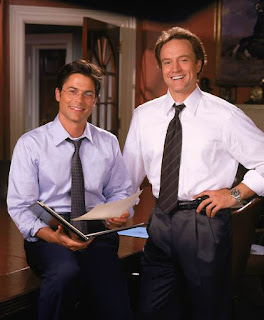 Under the initial “President-lite” plan for The West Wing, the primary focus of the series was going to be on close friends and colleagues Joshua Lyman, White House Deputy Chief of Staff, and Samuel Seaborn, Deputy Communications Director.

One actor considered for the role of Josh Lyman was Bradley Whitford. Whitford came to the series after a string of roles playing sleazy businessmen and movie villains – most notably in the Adam Sandler comedy Billy Madison. Whitford said: ‘I honestly didn’t want to play those parts but it’s very difficult because you wanna make a living, you wanna practice film acting, and if you’re a high hair-lined white guy, the villains are now, y’know, yuppies, and that’s what I got for a long time.’(1)

Whitford was already known to Aaron Sorkin, having performed in A Few Good Men on Broadway. He was already known to John Wells for his performance guest starring on a critically acclaimed first season episode of ER, “Love’s Labors Lost”. He auditioned for Sorkin, Schlamme and Wells, as well as Warner Bros casting agent John Levey. According to his brother David Whitford, who wrote about the casting process for Esquire: ‘He nailed it; they laughed out loud. When my brother was on the way out the door, Levey’s assistant whispered in his ear, “Nobody has done it like that! Wow! Wow! When he got home, there was a message on his answering machine from Sorkin: “You hit it out of the park’.”(2)

Thomas Schlamme was unconvinced, and requested that Whitford audition a second time, opposite Moira Kelly – who had just been cast as media strategist Mandy Hampton. Schlamme remained unhappy with Whitford’s performance, and Whitford’s agent was advised he was unlikely to be cast in the role. On the Friday before the pilot began shooting, and while Whitford was considering an offer from another network to star in another series, his agent called him with an offer: not Josh Lyman, but Sam Seaborn.

‘I was just, Nooooo. No, no, no, no,’ said Whitford, ‘so I called Aaron. You don’t know if you’re going to be articulate or pathetic. I honestly did not know. And I just said, “Aaron, I just feel this very strongly. This isn’t about me wanting a job. This is the only time in my life I will play this card. I am this guy; I am not the other guy”.’(3) Aaron Sorkin was convinced, and spontaneously swapped Whitford over to the role of Josh. This, of course, left a last-minute vacancy in the role of Sam Seaborn.

When later asked to describe the character of Josh Lyman, Bradley Whitford said ‘he’s an emotional cripple, that’s true, and a fool. He has many good qualities. He’s very passionate, and I think he’s willing to go through the unsexy, unglamorous work of partisan politics, where you’re faced, every episode – and for him, every day – “How do you get your feet dirty without disappearing in the mud in order to get an inch of what you really want done?”.’(4)

To research his role, Whitford read the political memoir of former Bill Clinton senior staffer George Stephanopoulos, which he described as ‘very helpful, just because it gave a sense of the sort of smell and the texture and the level of intimacy with the president, which I was just unaware of.’(5)

He also met with Clinton’s former adviser Rahm Emanuel, and ultimately both Whitford and Sorkin based much of Josh Lyman’s character and temperament on the notoriously abrasive Emanuel. ‘Pretty much all of the loose-cannon episodes, where my desire to win outweighed my ethics, are sometimes based on Rahm,’ said Whitford, ‘not that he would ever do that.’(6) In late 2008, life imitated the same art that had, nine years earlier, imitated life: Rahm Emanuel was appointed Chief of Staff to President Barack Obama – the same post held by Josh Lyman at The West Wing’s conclusion.

Finding a new actor to play Sam Seaborn was proving difficult. From the outset NBC was keen for the producers to cast a ‘name’ actor in one of the lead roles. ‘NBC wanted to know who else was in the cast,’ said John Wells. ‘If we are going to make something this unappealing to the public, could we get a bit of a star to drive it?’(7)

One of the actors considered was Rob Lowe. Born in 1964, Lowe shot to fame first for a Golden Globe-nominated performance in the TV movie Thursday’s Child and then when he co-starred in the 1983 hit The Outsiders, opposite Tom Cruise, Matt Dillon and Emilio Estevez. Subsequent performances in St Elmo’s Fire and About Last Night made him one of the most promising new movie stars of the 1980s. In 1988 Lowe was embroiled in a personal scandal when a videotape was released depicting him having sex with two women in a hotel room during the Democrat Party national convention.

Lowe continued to appear in a string of films and TV miniseries into the 1990s, including Bad Influence (1990), Wayne’s World (1992), The Stand (1994) and Contact (1997). At his audition Lowe deliberately played against his popular image. ‘Sam was a nerd and never got the girl. Never.’ he explained, adding ‘In four seasons, I kissed a girl once.’(8)

With Bradley Whitford now signed on as Josh, a last-minute rush was undertaken to sign Rob Lowe on in the role of Sam. He was ultimately promised top billing in the opening credits and the highest salary of the entire cast bar Martin Sheen. Lowe signed his contract one day before the pilot started shooting.

Speaking to Interview magazine during The West Wing’s first season, Lowe said ‘I read it and felt like I was born to play my character, Sam. It dovetailed with my personal interests, my being a political science junkie and having campaigned for various candidates and issues over the years. Temperamentally, Sam and I are very much alike.’(9)

A year later he noted ‘You measure yourself against the fictional character. Am I as honest as Sam, am I as funny? I’m not as smart as Sam. I didn’t go to Ivy League schools. I dropped out of college to go into movies.’(10)