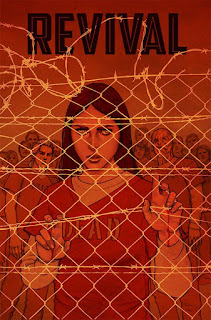 For the characters in Revival it's not a good time to be in rural Wisconsin. First there was the little problem of all the town's dead suddenly being alive again. Then there was the government quarantine, and rising dissent. Now a terrorist attack has taken out the town's mayor, the military have moved in take over, the revived have been imprisoned in camps and a militia is planning further attacks on the fringes of town.

The cover of Revival labels it as a 'rural noir', which turns out to be a fairly accurate description. From the premise it feels like it should be a horror comic, but while there's plenty of horrific moments it is, all things considered, more of a crime drama than anything else. For almost three years now the book has tracked an unexpected course. We still don't know what caused the dead to return to life - although there have been some hints and clues recently - but impressively it doesn't really matter. The mystery is a framework to tell interesting stories with well-rounded characters.

Emilio Laiso does a great job with the artwork, which matches Mike Norton's usual work so well that I almost didn't notice that the artist had changed. I have no idea if Laiso is a temporary or permanent artist for the book, but either way events don't skip a beat.

Tim Seeley is writing the hell out of this book, slowly developing the plot threads and winding them together in an excellent fashion. This isn't the sort of comic where you read one issue and get a single self-contained story. This is a deliberate slow-boiling serial, that gets more and more enjoyable the longer you read it. It's absolutely one of my favourite books on the market. (5/5)

Under the cut: reviews of Doctor Who: The 11th Doctor, Ghostbusters Get Real, The Infinite Loop, Star Trek and Usagi Yojimbo.

The entity at the heart of ServeYouInc has taken over a starship full of Cybermen and launched an attack on Ancient Rome. I feel as if I should be excited by this, but to be honest it's never dramatic or intriguing enough to be worth its while. The increasingly irritating Jones is barely to be seen this month, which is something of a relief, but even without him the issue is a pretty big disappointment. Decent artwork by Warren Pleece doesn't disguise a rushed, inconsequential script by Rob Williams. This whole year-long arc wraps up next month: let's home Williams can pull it all together and not disappoint. (2/2)

Ghostbusters is another one of the film properties that IDW has been playing with for a while. They had a hit last year with their Ghostbusters/Teenage Mutant Ninja Turtles crossover, so this year they're following it up with a Ghostbusters/Ghostbusters crossover. The continuity of the regular IDW comic book is crossing over with the 1980s animated TV series The Real Ghostbusters. It's kind of silly, but Dan Schoening does a good job replicating the look of the animated versions as they cross universes and meet their comic book doppelgangers. Erik Burnham's script is entertaining enough. This is a lot of fun if you're a big fan of the characters, but probably missable if you aren't. It's amiable but disposable. (3/5)

Colinet and Charretier's time-travelling lesbian romance continues. Teddy and Ano are on the run from the agency, finding a life for themselves in a secret getaway outside of time - but how long before they're discovered? Elsa Charretier's animation-inspired artwork is gorgeous, and is responsible for much of the comic's appeal. While Pierrick Colinet has written a fascinating storyline, and does some very impressive stuff with flow diagrams to represent internal thought processes, I found it a little hard to vault over some of the clunkier bits of dialogue and attempts at humour. This is an enjoyable comic, but it's the little things that are stopping it from becoming a great comic. (3/5)

The monthly Star Trek comic has been regularly undertaking the slightly odd process of re-imagining classic TV episode in comic book form, using the new continuity versions of the Enterprise crew from the recent feature films. This month "The Tholian Web" gets the remake treatment. It's only partially successful; Rachael Stott's artwork is solid, with good likenesses of the lead characters, but Mike Johnson's script feels a little ordinary. It's got the Star Trek tone down perfectly, but simply feels a little bit generic and run of the mill. This was the same problem I had with the comic over other recent issues. I think there's great potential in Star Trek comic books, but for now this one doesn't appear to be it. (2/5)

Usagi is caught in between two thieves and a ninja, and just when he thought things couldn't get any more complicated it all turns out to be related to Hijiki, the treacherous noble who murdered Usagi's master. This book is what it is: beautifully drawn anthropomorphic animals in feudal Japan. The tone is bright but rather formal as well, with a rich attention to detail in terms of language, tradition and ritual from pre-Meiji Japanese culture. This combines comedy, drama, action (Usagi versus a horde of ninjas) and some of the best comic book storytelling in the world today. Quite frankly if you've never read Stan Sakai's work you've missed out on one of the all-time greats - it's fantastic to have this comic back on a regular schedule. (4/5)