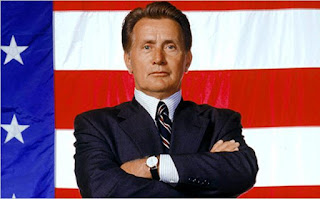 For several months after pitching the series, Sorkin held off from writing a pilot script. In the end he wrote the entire 42-minute script over the 1997 Thanksgiving weekend. (I will go into more detail on the pilot script later.)

The last-minute rush to put words onto the page was not unusual for Sorkin. He had a notorious – and self-admitted – difficulty in generating plots. ‘Of all the storytelling elements there are, plot is the one I'm least comfortable with,’ he said. ‘I wish that we lived in a world where we could be entertained by a half hour's worth of crackly dialogue and nothing else, because plot frightens me a little bit.’(1)

Last minute and rushed scripts would become a significant problem for The West Wing during its first four seasons, with almost all episodes shot based on a first draft script – often completed after shooting had actually began. Thankfully John Wells was a very hands-on and organised producer. It could be argued that the combination of the well-prepared and methodical Wells and the freewheeling and unreliable Sorkin was the magic ingredient that sparked The West Wing’s creative success. Wells did admit to occasionally getting frustrated with Sorkin’s fast-and-loose writing style. ‘I try to get him to be more like me,’ he said, ‘and he tries to get me to be more like him.’(2)

The West Wing was initially intended for broadcast in the 1998 Fall season, but a real-life political scandal got in the way. In January 1998 President Bill Clinton denied under oath that he had ever had sexual relations with former White House staffer Monica Lewinsky. As the year progressed, both Clinton and Lewinsky were called before a grand jury, with Clinton admitting to the affair but continuing to insist he had not perjured himself in earlier testimony. The scandal, which was covered in typically sordid detail by the American news media, led NBC to fear that a mass audience would no longer respect or have any interest in a television drama about the American President. The West Wing was shelved for 12 months while Warner Bros waited impatiently for the controversy to die down.

Interviewed while promoting The West Wing’s second season, Sorkin said ‘I turned in the pilot script of the episode to Warner Brothers and to NBC I think about three weeks after Monica Lewinsky came on our radar screen. And at that point, there was a feeling that there was a bit of a “snicker” factor attached to the White House and that we wouldn't be able to do the show, the kind of show that we wanted to do.’(3)

During the delay Sorkin kept himself busy, using his new-found interest in television writing to develop and write a new sitcom for ABC. Sports Night, ostensibly a comedy set behind the scenes of a cable network sports program, was an intricately written and clever examination of moral and ethical problems in journalism. Critics went crazy for the series, but audiences – possibly confused by the fast-paced and complex plots, as well as a poorly-placed laugh track – failed to embrace the show. It was cancelled after two seasons. Sorkin fielded multiple offers to continue the series for a cable network, but turned the opportunity down to concentrate on The West Wing.

A significant partnership formed on the set of Sports Night was that of Aaron Sorkin and director Thomas Schlamme. Schlamme was hired to direct the pilot of The West Wing, and served as executive producer with Wells and Sorkin for four seasons. Juggling Sports Night and The West Wing was a busy time for Aaron Sorkin: between September 1998 and December 2000 Sorkin wrote or co-wrote 76 episodes of television, totalling 38.2 hours – or 2,292 minutes – of broadcast television.

By the end of 1998 NBC was suitably convinced that production on The West Wing’s pilot could go ahead, and that the production team could begin the process of casting. Sorkin’s initial conception for the series, and the one that was expressed in his pilot script, was that the President himself would only be seen in passing. The series would focus on the senior staff, and there was a concern the audience might not relate to the day-to-day life of the President himself. Sorkin was, however, quite clear on what sort of character the show’s President was going to be. He ultimately based the character on his own father, ‘who really has a great love of education and literature, all things old, and believes in a genuine goodness in people, and has a real “Aw, Dad” sense of humour. I really wanted to try to be able to capture that.’ (4)

The character was named Josiah “Jed” Bartlet. The name was derived from the real-life historical figure Josiah Bartlett, who was one of the signatories of the Declaration of Independence. Sorkin decided to make his President Bartlet (with one T at the end rather than two) a descendent of the noted founding father.

The original plan was to feature President Bartlet four to six times a year. With that in mind, casting agents started looking for some high profile choices for the role. The first three names considered were Sidney Poitier (In the Heat of the Night, Guess Who’s Coming to Dinner), Alan Alda (MASH, Crimes and Misdemeanours) and Jason Robards (All the President’s Men, Julia). Not only was Poitier not interested in the part, his agent’s asking fee was well in excess of what the production could afford. Alda, while flattered, was not prepared to make a return to network television. For whatever reason (none has been openly expressed) Robards did not take the role either. Later names considered included George C. Scott (Patton) and Martin Sheen. Schlamme noted ‘Martin didn’t seem right at first. He had played Chief of Staff in The American President, and Aaron Sorkin and I thought it might be confusing to audiences.’ (5)

Despite their concerns, Sorkin, Schlamme and Wells offered Sheen the part on a deal allowing for four appearances per season. During the pilot shoot, Sorkin was impressed: ‘By the end of the first day of filming, as I saw Martin’s work and heard him say the words, I knew I had to keep him.’(6)

Co-star Bradley Whitford later wrote ‘Martin is – the most surprising thing when people meet Martin is his is – he’s just the sweetest guy in the world. He is so gentle, and he’s not intimidating. He’s not bossy. He’s a really sweet guy.’(7)

Martin Sheen was born Ramón Antonio Gerard Estévez in Dayton, Ohio in August 1940. His mother, Mary Ann Phelan, was from Borrisokane, Ireland. His father, Francisco Estévez, was from Galicia in Spain. Sheen was one of ten children in the family.

During his birth, an accident with a set of forceps crushed his left arm. The injury left him with limited lateral movement on his left arm, a disability he carries to this day. It is this lack of movement that led to the famously bizarre way President Bartlet throws on his jackets in The West Wing – it is the actual way Sheen himself does it.

Sheen was drawn to acting at a young age, but his father disapproved. Over his father’s objections, he borrowed money from a priest and moved to New York to pursue an acting career. He assumed the stage name Martin Sheen in part after Catholic archbishop Fulton J. Sheen. He made his on-screen debut in an episode of Route 66 in 1961. Other early appearances were on such television shows as Naked City, Armstrong Circle Theatre, The Outer Limits, My Three Sons, The Defenders and As the World Turns. In 1973 he starred in Terrence Malick’s widely acclaimed film Badlands. Six years later, in 1979, he starred in his most famous role: Captain Benjamin Willard in Apocalypse Now. During the long and torturous production shoot of Apocalypse Now Sheen suffered a heart attack. He was only 38 years old at the time. Other major roles in film included The Final Countdown, Gandhi, The Dead Zone, Firestarter and Wall Street (alongside his own son, Charlie Sheen).

Test screenings of the completed pilot created an unexpected problem for the production team. Audiences adored Jed Bartlet. Previous fears that viewers would not relate to or be interested in the character were unfounded. Sheen later said: ‘I was never supposed to do this series. It was originally only about the staff at the White House. The president was just a minor character. But after I did the pilot, they looked it over and saw what a great set the Oval Office was. Well, Aaron Sorkin, the creator of the show, came back to me and asked if I wanted to do the series. So I had a think about it. We renegotiated the terms and here I am.’(8)

Martin Sheen was contracted for three seasons of The West Wing. Since the decision had been made to begin the series almost a full year into Bartlet’s first term as President, three years would mean Sheen’s contract would expire at roughly the same time as Bartlet’s second Presidential election – a convenient time to re-cast the role if required.