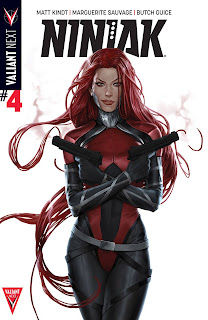 Psychokinetic hair. That's the first thing with which the reader is confronted in issue 4 of Ninjak: a top-secret intelligence profile about psychokinetic hair. Ninjak is a knowingly ridiculous series, essentially blending James Bond with, well, ninjas. The first story arc of this recent relaunch has focused on Ninjak infiltrating an international gun-smuggling syndicate, only now his cover has been blown thanks to the mysterious assassin Roku. She has psychokinetic hair.

So if blonde English ninjas armed with Q-branch gadgets fending off red-haired assassins with prehensile locks sounds like your thing, then Valiant has the comic for you, At least, that's where I assumed this issue would go, since that's by and large where we left it last month. Instead this issue presents Roku's origin, and it's a dark fantasy filled with endless caverns, dark cults and monstrous demons.

That's one of the things I like the most about Valiant: their comics are very good at jumping tracks and switching genres. Juan Jose Ryp does outstanding artwork in this issue, with the assistance of Clay and Seth Mann and Marguerite Sauvage. It's possibly the prettiest comic of the week. Matt Kindt writes an intriguing story too, although it's always the tiniest bit suspect having all of this cod Asian mythology wrap around a Caucasian protagonist. Then again, that's pretty much Ninjak as the character was created, so I can hardly claim it's Kindt's fault.

This is another great book from Valiant, although you should note that the interiors aren't quite as sexualised as that cover. (4/5)

Legendary apparently set up their comic book imprint as an IP generator for potential feature films. I can't wait to see them attempt to transform Grant Morrison's universe-jumping meta-textual science fiction horror siege crossed with writer's nervous breakdown into a summer blockbuster. This final issue does pretty much exactly what you'd expect it to: wrap up the storyline, leave the door open for a sequel down the line, and mildly frustrate with Morrison's typically obtuse and complicated plotting. It's been a slightly uneven book, but oftentimes a very good one. The real star has been Frazer Irving's outstanding artwork. This is going to make a stunningly beautiful graphic novel in a month or so. (4/5)

Like many DC titles this month, Aquaman has received a bit of a shake-up and a make-over. This is practically par for the course for the character, who in the last 20-odd years has gone from green and gold hero to a bearded misanthrope with a hook for a hand, to an idealistic outcast with a magical water hand, to a sword-and-sorcery protagonist, to being dead, to being miraculously returned to life, then rebooted back to his classic "King of Atlantis" persona, and now to being a runaway outcast in a breastplate and manly stubble. It's a reasonably solid new beginning, jumping between past and present to show both a new otherworldly menace striking the world's oceans and Aquaman's new life as fugitive on the run from his ex-girlfriend Mera. Trevor McCarthy's artwork is strong and easy to follow. As a soft reboot, however, I don't see this picking up many new readers. It's good, but it's not the sort of attention-grabbing exceptional it needs to be to arrest this book's gradual decline in readers. (3/5)

When the cover of this issue confirmed it was a "Last Days" tie-in to Secret Wars, my heart sank a litle. Thankfully it's a bit of a ruse: despite a few pages at the start featuring Natasha working to save people during the apparent end of the world, the bulk of the book flashes back to her past as a Russian intelligence agent trying to extract a family from Cuba before the Americans do. It's tightly and intelligently written, and stunningly illustrated. This is hands-down one of the best books that Marvel is publishing at the moment. One small issue: this storyline clearly involves Natasha working for a Soviet Russia, which is of course her background, but even if this story takes place at the very end of the USSR's existence, and even if she's just 18 when she's undertaking her mission, that would still make Natasha 42 years old in the present-day. I get the impression she's at least 5-7 years younger than that. Ah well, when things like this happen I like to assume that wizards did it. (5/5)

This is basically a fresh story arc for Justice League 3000 under a new name, DC presumably hoping that the new #1 will attract more readers to the book. I can appreciate why: despite some really funny dialogue, an inventive set-up and career-best artwork by Howard Porter, JL3000 simply failed to attract readers in the first place. I'm not sure slapping a revised title on the cover is going to improve the situation, but for now I'm just happy we'll get a few more issues before cancellation. This issue sees the Justice League fail to defeat Starro due to a legal technicality, while Guy Gardner - now with a female body, long story - takes matters into her own hands. If you didn't read the last volume I encourage you to give this one a try: there's enough exposition to give you a road into the action, but to be honest I think it's easy enough to just dive in and pick up the plot threads as you go. This book deserves more readers, and I want it to continue for as long as it can. That said, I do have a quibble with how this issue treats Guy's new female form. It's not entirely clear whether he is unwillingly trapped in a female body here, or whether she has assumed a new gender identity as part of her reincarnation. This makes it difficult to know how to receive a brief conversation between Batman and Superman over this matter, in which Superman - an idiot and a thug in this incarnation - appears to be brutally insensitive about Guy's gender. It's a disappointing few panels in an otherwise excellent issue. (4/5)

This dark science fiction mystery continues to be good, but I have to admit this fourth issue didn't grab my attention quite as much as the other three. Andy Belanger's artwork is still great, and Lee Loughridge provides predictably brilliant colours, but it's Becky Cloonan's script that seems to let things down a little. While the plot develops a bit, it doesn't feel as if it developed enough. The mystery as to who killed Braith's sister is still hanging out there, as well as whatever it is in the Southern Cross' engines that's causing weird hallucinations and supernatural events to occur. The book's still enjoyable, and the plot could very easily kick into high gear next month, but for now I was expecting great and merely got 'good', (3/5)
Posted by Grant at 10:32 PM