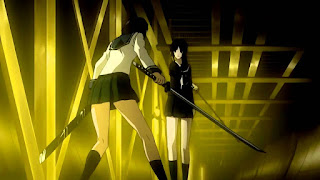 Episode 1 of Ga-Rei-Zero concluded with its entire lead cast brutally slaughtered by a mysterious sword-wielding young woman in a school uniform. Episode 2 picks up events a short time later: there's a new team of anti-demon operatives in the field, one of the "Level B" monsters has inexplicably regenerated itself, and the Department of the Environment is forcibly taking over the operation from the military.

This second team has its own set of odd characters, included twins with identical facial scarification, a bearded guy with drill-bits for hands, a guy backed up by a team of psychic ferrets, and a schoolgirl with a sword of her very own. Certainly they're a more interesting group than the original set; although at least one of them doesn't appear to make it out of the episode alive, so who knows how long it will be before the series has to introduce a third team.

This new team's fight against the revived monster takes a turn for the worse when they're forced to tackle a horde of zombies and the return of the evil schoolgirl with a sword - who turns out to be Yomi Isayama, a former team member turned evil. The episode climaxes, rather predictably, with the first of what I assume will be several schoolgirl versus schoolgirl swordfights.

In my review of episode 1 I assumed the swords involved were katana, but they're too long for that. I think they might be odachi, which is basically a longer katana with a hilt for two hands, but someone more familiar with Japanese sword design will have to let me know.

I'm still on the fence with this series. There are an awful lot of clichés flying around, and the animation seems even more limited than one would expect from a late-night TV series. There's also just a bit too much fan service going on: there's a sort of compact an anime fan needs to make with most series, an assumption that there's inevitably going to be a bit of unwanted implied sexuality or partial nudity. It usually manifests as brief glimpses of female characters' underwear. To be honest this episode went a bit further than that, culminating in a seedy combination of implied nudity and violence. It's not a pleasant combination.

So basically this is the second episode in a row to disappoint me. What's worse, there's no real indication of what the series is really about or which characters to whom I should pay attention. The quality ratio is still flat-lining at zero. Hopefully episode 3 will finally provide some badly-needed direction and clarity.
Posted by Grant at 8:32 PM