The West Wing: "The White House Pro Am" 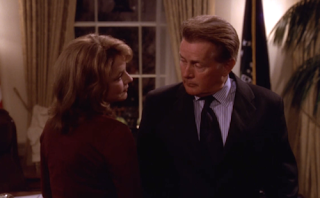 In “The White House Pro-Am”, the Chair of the Federal Reserve dies of a heart attack – putting the President at odds with his own wife when she pre-emptively suggests his choice of successor. Meanwhile the First Lady’s social agenda forces a congresswoman’s hand in amending an important trade bill.

This is an unexpectedly lacklustre episode, which makes the mistake of drawing its drama out of a conflict between Jed and Abbey Bartlet. Jed is snippy because his administration’s best choice to replace the Federal Reserve Chair is Abbey’s ex-boyfriend of three decades ago. This kind of behaviour doesn't sit well with what we’ve previously seen the character say and do. It feels cheap and unusually domestic. With Jed’s 30 year-old jealousy as a very shaky foundation for the episode, it’s no surprise that the rest of the action it inspires is so weak.

The tragedy is that there’s a lot of dramatic potential in exploring the relationship between the offices of the President and of the First Lady. Sadly it’s not Sorkin who fully exploits this idea, but rather it’s Eli Attie in Season 5’s “Constituency of One”.


Nadia Dajani plays Lilli Mays, Abbey Bartlet’s Chief of Staff. She had previously played the role of Amanda Moyer on Ned and Stacey (1995-97), as well as guest starred on an episode of Sports Night (“Kyle Whitaker’s Got Two Sacks”, 1999). The character doesn’t appear again after this episode, although she is later replaced by Amy Gardner (Mary Louise Parker) in Season 4.

In what is a nice piece of plot development, Mrs Bartlet’s spotlighting of Jeffrey Morgan’s anti-child labour group inspires Congresswoman Becky Reeseman to introduce a corresponding amendment to an important trade bill. The bill is crucial for the Bartlet administration, and Reeseman’s amendment will guarantee its failure. It’s a nice subplot, and one that highlights how important a coordinated strategy is within Presidential politics. Reeseman is introduced almost exactly at the mid-point of the episode as well, sending the plot off in a new direction and introducing some badly needed tension. When coupled with the Bartlet’s fight over the Federal Reserve Chair, however, this storyline never gets the focus it deserves.

Amy Aquino plays Becky Reeseman. Aquino’s other roles have included Phyllis Silver in Brooklyn Bridge, Dr Joanna Diamond in Picket Fences, and the recurring role of Dr Janet Coburn in ER.
Reeseman is introduced working out at the same gym as Sam. In an interview with Soap Opera Weekly, Rob Lowe noted ‘I go to lunch at the gym every day to keep my energy up. And Aaron has always been fascinated. “How can you do that? You work so hard, how can you go to the gym at lunch?” he’ll ask. The next thing I know, I get an episode where Sam’s at the gym.’(1)

The three congressmen that Josh and Toby meet were played by Richard Fancy, Kathleen Garrett and Joe O’Connor. Of the three Joe O’Connor is the only one of three actors to return to The West Wing – he plays Democratic congressman Calhoun – presumably the same character – in “Bartlet for America”. David A. Kimball, who plays one of the intelligence officers who briefs the President early on in the episode, returns to The West Wing in its final season, playing a Debate Moderator in “Running Mates”

One strong thread running through the episode is the development of Zoey and Charlie’s relationship. It’s warmly written and nicely played, and works through a small arc of its own – independent of the rest of the episode. Charlie’s conversation with Danny Concannon towards the episode’s end is particularly strong, and has a freshness that comes from pairing two characters who haven’t really interacted before.

Shortly after the episode was broadcast Aaron Sorkin found himself seated opposite real-life Federal Reserve chair Alan Greenspan at a White House Correspondents’ Association dinner. ‘Greenspan was troubled,’ said Sorkin, ‘because about two months ago I killed the Fed chair with a heart attack and nobody on the show gave a damn that the guy was dead.’(2)

That Greenspan was a viewer of The West Wing was a subject of some excitement for Janel Maloney: ‘He’s so powerful. He and his wife watch the show. And I just thought, “My God, Alan Greenspan is sitting on Wednesday nights watching me on TV”.’(3)