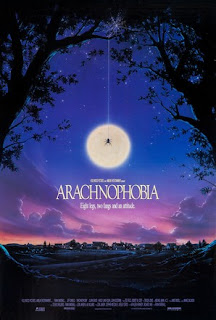 Throughout the 1990s Amblin Entertainment seemed to be an unstoppable factory of populist family films, jumping genres from action to science fiction to horror, and forming the foundation for many children's film-going experience. Even when the bulk of the films weren't directed by Steven Spielberg, his presence was constantly felt throughout whether in the development of their screenplays or their particular visual aesthetic.

This long series of family films appeared to by-and-large conclude in 1990 with the release of Frank Marshall's Arachnophobia. Before that film the company produced the likes of The Goonies, Gremlins, Young Sherlock Holmes, Batteries Not Included as well as Spielberg's own E.T. the Extraterrestrial and Hook. After Arachnophobia the company seemed more likely to produce films like Cape Fear, The Bridges of Madison Country or To Wong Foo. Family films continued to emerge from Amblin, but that core vibe of its original 1980s films seemed to get left behind.

So in many respects Arachnophobia feels like the end of an era, straddling the gap between two kinds of film as well as two decades.

The film is based around an outbreak of deadly Venezuelan spiders in a small Californian town. The newly arrived MD Ross Jennings (Jeff Daniels) can see the signs, but no one appears willing to believe him. By the time people do begin to take him seriously, the body count is rising and the town may already be overrun.

This is a very corporate product: Frank Marshall directs the film with a clear eye for how Steven Spielberg would direct it, giving the film a very strong "Amblin" look. While it has the look, it does lack the heart to a degree: this is a breezy and superficial film that doesn't really do much beyond provide a bunch of PG-rated scares for a family audience. It would be easy to dismiss or even condemn the film as a result, but that would be unfair. This is a film made for a specific purpose, and it achieves that purpose rather well. It's a slightly silly film, and certainly a rather predictable one, but there's a comforting sort of familiarity to it.

Jeff Daniels is a very likeable lead actor. It's always struck me as slightly odd that he has never become a major star despite his talent. He makes Jennings an engaging and easily identifiable protagonist. Much of the supporting cast play their roles in fairly broad strokes, either simplistic or exaggerated. John Goodman is particularly over-the-top as a local pest exterminator. He's clearly having a lot of fun - it's just questionable whether the audience is having quite as much. Julian Sands, on the other hand, is actively awful and unconvincing as an English scientist whose research trip to Venezuela kicks off the outbreak in the first place.

Arachnophobia is a harmless and amiable all-ages horror movie. Things jump out when their supposed to, characters die with reassuring regularity, and numerous spiders crawl around in all manner of worrying quantities. Sure it doesn't have a single surprise up its sleeve, but sometimes a pleasant, predictable studio picture is all you really need.
Posted by Grant at 6:32 PM