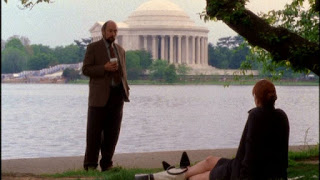 In “Mandatory Minimums” Bartlet throws down his gauntlet to the Republican majority leader by nominating his own picks for the Federal Election Commission. The White House staff work on a new drug enforcement policy, Josh feels awkward when Joey Lucas arrives to consult for the President, and Toby is set up for an important meeting – with his ex-wife, Congresswoman Andy Wyatt.

“Mandatory Minimums”, while continuing the storyline of Bartlet’s renewed vigour in pushing his own agenda, is focused primarily on the problem of drug enforcement. Through its characters, The West Wing questions the merits of incarcerating drug offenders over providing them with medical treatment. It also directly targets the issue of mandatory minimum sentences for drug offences, and the vast disparity of sentences issued between powdered cocaine-related offences and those based around crack cocaine.


Despite the serious subject matter, and the episode clearly deals with those aspects with the gravity they deserve, “Mandatory Minimums” has an unexpectedly playful tone. It dances lightly from comedy to drama, giving excellent humorous moments and scenes to several members of the cast: Josh, Toby and Sam in particular. The moments of comedy and drama even infiltrate the same scene, such as when Sam discovers Republican aide Steve Onorato knows of his friendship with Laurie. The scene can be watched two ways: Sam’s genuine distress and fury on one side, and Toby and Josh’s breezy ridicule of the situation on the other. When Sam asks ‘Are you saying, he... he tried to practice on my...?’ and Toby offers ‘credulous simplicity?’, Toby is quoting from Gilbert and Sullivan’s The Pirates of Penzance. This operetta becomes a subject of debate in Season 2’s “And It’s Surely to Their Credit”.

Even such commonplace events as a strategy session are given an idiosyncratic twist, in this case being set outside a café over breakfast. It is interesting that Donna is included in this senior staff meeting – the character has featured more and more as the season has progressed, and within three episodes makes the leap to series regular with “In the Shadow of Two Gunmen, Part I”. By contrast Mandy is barely seen at all – she makes a brief appearance when she’s barred from an Oval Office meeting.

The introduction of Andy Wyatt, Toby’s ex-wife, spun out of Sorkin and Schlamme realising that Richard Schiff had been wearing a wedding ring since the start of the series. The ring was Schiff’s own addition, and he hadn’t actually told anyone he was deliberately wearing it – it took eight episodes for the executive producers to notice. ‘They came up to me,’ Schiff said, ‘and said “Are you married?” And I said, “No”. And they said, “Well, why are you wearing the wedding ring?” I explained that it was a private thing. They said, “Good, because we want to give him an ex-wife.”[ii]

It had always been Schiff’s intention that Toby had a wife who had died, and used that thought to ground the character’s melancholic and devoted personality. With the introduction of the very-much-alive Andy, the character was subtly pushed in a fresh direction.

As a musician, often performing as Bird York, she has contributed to a string of motion picture soundtracks – including Crash (2004), for which her song “In The Deep” was nominated for an Academy Award. Her debut album, Bird York, was released in 1999. It was followed by The Velvet Hour (2005), Wicked Little High (2006) and Have No Fear (2008).

Andy Wyatt appears in another 14 episodes of The West Wing, making her final appearance in 2006’s “Institutional Memory”. echoed many guest stars in her praise of the series, and its cast and crew. ‘It’s a great set to work on,’ she said. ‘Really smart, competent, friendly people.’[iii]

Bruce Weitz plays the unnamed Senate Majority Leader. “Mandatory Minimums” marks his only appearance in the series. Weitz most famously played Sgt. Mick Belker in Hill Street Blues from 1981 to 1987. Other major roles include Mike Urbanek in Anything But Love (1991-92) and Dr Rubinstein in The Byrds of Paradise (opposite Timothy Busfield, 1994). His other performances included episodes of Matlock (1987), Midnight Caller (1989), Civil Wars (1993), Highlander (1994), Dream On (1994), The X Files (1995) and NYPD Blue (1996). In 2003 he played Alderman John Bright in a major story arc of ER. Since 2007 he played Anthony Zacchara in the long-running soap opera .

Bartlet’s speech during the episode’s cold open took 11 takes to complete – Martin Sheen kept insisting on giving the scene another go to make it better. It’s not often that we get to actually see one of Bartlet’s speeches, but when we do it’s usually well worth the wait. This episode is no exception. Bartlet’s anecdote of ‘Irish lads’ throwing their caps over a wall was taken from an actual speech given by President John F. Kennedy one day before his assassination; Kennedy used the story of the caps and the wall in reference to the USA’s lunar program.

Another highlight of the episode is Leo’s meeting with the various congressional aides in the Press Briefing Room. This is the sort of scene that The West Wing is ultimately all about: political manoeuvring, the discussion of serious social issues, and a balance of comedy and drama. John Spencer plays it well.

Given Aaron Sorkin’s own high profile history of drug use, rehabilitation and criminal convictions for possession, the debate over drug enforcement has an unexpected- and likely unintended – weight to it. It’s never the best of ideas to look for the writer peeking out from behind his or her own characters, but in this case – with Sorkin’s personal life being what it is – it’s rather difficult not to.

Ultimately “Mandatory Minimums” is another top-notch episode for The West Wing’s first season. The series is firing on all cylinders, and speeding headlong towards its impending finale – now only two episodes away.

The episode’s director was Robert Berlinger, whose other directorial credits include episodes of The Golden Girls, Empty Nest, 3rd Rock from the Sun, The King of Queens, Veronica’s Closet, Chicago Hope, Dharma and Greg, Weeds and Arrested Development. Berlinger returned at the end of The West Wing’s second season to direct “18th and ”.