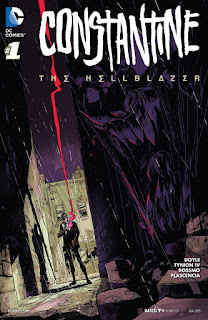 When DC Comics launched their New 52 initiative, they clawed a lot of characters back from self-contained DC Vertigo versions and properly into the DC Universe. In the case of Animal Man and Swamp Thing this wasn't necessarily a bad thing: both characters had been well-exploited as mature-reader titles and were effectively lying fallow. In the case of Hellblazer, and its dodgy magician protagonist John Constantine, the shift was more contentious. The change meant not only cancelling Vertigo's longest-running monthly title, it also meant peeling off the less savoury parts of John's character, making him more palatable for a mainstream readership, and shoe-horning him into adventures with the Justice League.

His New 52 solo title, Constantine, was not very good. This DC You version, titled Constantine: The Hellblazer, is a hell of a lot better. Old school readers of the Vertigo Hellblazer may find this first issue a little too run-of-the-mill: it's got demons hiding in plain sight, John strutting around smoking cigarettes and being a cocky asshole, and - crucially - John being an untrustworthy bastard as a core component of the plot. Put simply, this may not be Constantine anywhere close to his best, but he's closer than he's been since his Vertigo series was cancelled. This is a good thing.

Ming Doyle and James Tynion IV clearly know and love the character, and they give him a firm foundation here. There's some rather striking panel layouts as well, making this a more inventive read that you'd normally get from a DC book. It's also definitely got an edge to it: it's not just the smoking and drinking, it's the foul language, the blood, the horror, and the sex. It's all marvellously illustrated by Riley Rossmo, who's a sensational artist well matched to this kind of material. His Constantine is perhaps a little thinner and younger than one might expect, but it's a new look that works well.

Under the cut: reviews of Disciples, Gotham Academy, Silver Surfer and Ultimate End.

Steve Niles wrote 30 Days of Night, which I loved. Christopher Mitten illustrated Umbral, which I also loved. Trying out their new science fiction horror comic seemed a no-brainer. It's a book that mostly works. The characterisation is top-notch, and Mitten's art is perfectly suited to the material and great to look at. It's also got a genuine sense of wonder about space, as a team of bounty hunters travel to one of Jupiter's moons on a rescue mission. The biggest problem is that the issue doesn't sell me on the book as a whole: there's a last-minute twist that suggests we're reading a very different sort of story to the one promised in the first 20-odd pages. That left me more confused than interested. Nonetheless, it's the work of two great talents and does show promise - it may simply be that it's a story better told in a collected edition than in individual issues. (3/5)

This is a pretty neat entry issue for new readers, given that it's fairly self-contained, reflective of the general "Hogwarts of Gotham" theme, and includes a nice hook with a guest appearance by Damian Wayne. While the story by Cloonan and Fletcher is breezy and entertaining - and my word the DC Universe is in sore need of more breezy stories - the real stand-out is Mingjue Helen Chen's artwork. It has an absolutely stunning animation vibe, looking less like traditional comic book art and more like frames out of a beautiful cartoon. Gotham Academy isn't often the best comic of any given week, but it's always one of the most fun and enjoyable - this issue's no different. (4/5)

After escaping from Galactus, the Silver Surfer with his companion Dawn and the many survivors of Galactus' earlier attacks has settled down on a new planet. It seems like paradise. The weather is perfect, the food is plentiful, there is no sickness or disease. Dead loved ones are there too, and- wait a minute! It's all a ruse! I don't mind spoiling that, because to be honest this issue spoils it itself by page 2. The bulk of the issue is spent hammering home the dream sequence until it's intolerably tedious to read. Allred's artwork looks great, of course, but Slott really fails to bring the goods writing-wise. One thing that did make me happy was that this issue wasn't tied into Marvel's tedious Secret Wars event. More fool me: the ad at the back of the comic reveals that from next issue it will be. Boo. (3/5)

I picked this up because I forgot to cancel my order for it. If this is honestly the best Marvel can do to wrap up their Ultimate Universe, I think they need to just kill it immediately and cut their losses. This issue features a great conversation between two Tony Starks, and that's about it. The rest either duplicates stuff we've seen before - Peter Parker meeting the Ultimate Aunt May and Gwen Stacy - or simply confuses the reader. It's impossible to follow this book on its own merits, and once you start flicking past pages you're not understanding the whole book becomes visibly short and over-priced. The Ultimate Universe deserved better than this - and where the hell is Miles Morales? (1/5)
Posted by Grant at 5:02 PM