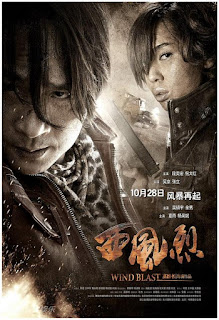 A debt-ridden boxer (Xia Yu) shoots a man dead in Hong Kong before fleeing to mainland China. A year later, a team of police officers have almost succeeded in tracking him down along the borders of the Gobi Desert - only to discover that a pair of assassins (Francis Ng and Yu Nan) are also on his trail.

Wind Blast is a 2010 Chinese action film written and directed by Gao Qunshu. It's not simply an action film: it's essentially a Chinese-language modern-day western, with lawmakers and criminals circling each other's trails on horseback while wearing cowboy hats. It's shot like a western, climaxes with a one-on-one showdown in the middle of an isolated town, and has a deliberate guitar-dominated musical score that brings to mind John Woo's 1996 action film Broken Arrow.

That's not to say it's not also a very Chinese-style film. The characters all seem to spend a remarkable amount of time talking about fate, destiny and honour, in that way that the protagonists of Chinese action films often seem to do. There's more than one slightly surreal moment, the most memorable of which is a climactic horse stampede. It's not simply that some horses are stampeding, it's that they do it through a town, and that they're remarkably tiny horses.

The film's setting is the real star, with the chases and shoot-outs mostly taking place among the craggy rocks and hills along the edge of the Gobi Desert. The film is visually striking, with Qunshu making the most of the relatively unique landscape. It's an inhospitable, unwelcoming environment, and poor weather hits a peak during the film's final 20 minutes as a windstorm hits an isolated village where the heroes are holed up for their last stand.

Yihong Duan plays Xiang Xi, the closest thing the film has to a central character. He provides a lot of nuance to what is a pretty thin character. This is the first film I have seen him in, but he's apparently widely liked in China. I can see why. Hong Kong star Wu Jing plays Yang Xiaoming, a resentful junior officer with a serious chip on his shoulder. He's well played, but by virtue of being the most traditional character in the film he's also arguably its least interesting. Much more entertaining is Dahong Ni, particularly likeable as an ill-tempered local police detective.

Francis Ng and Yu Nan are brilliant as the film's villains. Ng plays Mai Gao in a remarkably middle-aged fashion: he's a trained killer, but he's got a well-honed sense of politeness about him. As his sidekick A Nuo Yu Nan is more frightening: she plays the part with a series of bored silences and resentful comments. Mai Gao comments to her at one point that she should quit being an assassin because she likes killing people too much.

Altogether the film doesn't add up to anything particularly memorable, however it is very enjoyable to watch. The actors generally do a very good job overcoming a straight-forward, arguably unimaginative script, and the location and cinematography keep things visually interesting from start to finish. If you're a fan of Chinese-language action films, it's definitely worth tracking down.
Posted by Grant at 12:28 PM