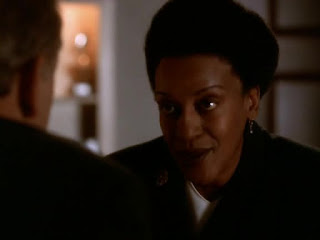 While Sam and Toby head cross-country to rescue a Supreme Court Justice nominee, Josh speaks to a group of political studies students and recounts a day that features root canals, a Cabinet Secretary flying off the handle and a non-existent secret plan to fight inflation.

Far and away the most interesting part of “Celestial Navigation” is its structure. The episode employs a slightly complex non-linear narrative. Josh is appearing at a university political science lecture, where to give the students an idea of life in the West Wing he recounts the last 36 hours of his job.

The episode could have very simply flashed back and forwards between Josh describing his day, and then those scenes playing out. Instead Sorkin, Myers and O’Donnell add another plot line, contemporaneous to Josh’s lecture, in which Sam and Toby head out to Connecticut in the middle of the night to free Judge Roberto Mendoza from a police station lock-up. If you imagine a typical story structure as a short, wide rectangle, with a number of plots occurring alongside each other, and a flashback-heavy non-linear story structure as a narrow, long rectangle, with a number of plots occurring one after the other, then “Celestial Navigation” is in the odd position of having an “L”-shaped plot. Things flash back and forth, but they’re happening at the same time as well. It’s clever stuff, and Sorkin will return to this kind of non-linear storytelling several times as the series progresses (notably in “In the Shadow of Two Gunmen”, “Noël”, “Two Cathedrals”, “Manchester” and “Bartlet for America”).

The idea of an African-American Secretary of Housing losing her temper and accusing her committee chairman of racism was developed by Dee Dee Myers. Sorkin said ‘the way Dee Dee did it was by using the phrase “If the shoe fits…” In my script I kept having people say, “If she was going to lose her cool, couldn’t she find some better way of phrasing it than “If the show fits”? That kind of thing drives Dee Dee crazy because I spent the entire episode mocking her dialogue.’(1)

Secretary of Housing Debbie O’Leary is played by CCH Pounder. Pounder was one of the final actresses short-listed for the role of C.J. Cregg, before losing the part to Allison Janney. Carol Christine Hilaria Pounder was born in British Guiana (now Guyana) in 1952. Pounder made her television debut opposite Morgan Freeman in a 1979 adaptation of Shakespeare’s Coriolanus. She has since appeared in more than 100 film and television productions, the most famous of which is the 1987 film Bagdad Café. Other notable performances include All That Jazz (1979), If Tomorrow Comes (1986), Women in Prison (as Dawn Murphy, 1987-88), Postcards from the Edge (1990), L.A. Law (as Judge Roseann Robin, 1986-92), Robocop 3 (1993), Benny & Joon (1993), The X Files (1994), Face/Off (1997), ER (as Dr Angela Hicks, 1994-97) and Millennium (as Cheryl Andrews, 1996-98). Subsequent to her appearance in The West Wing, Pounder was cast as Detective Claudia Wyms on the police drama The Shield. She is a four-time Emmy nominee, for her performances in The X Files, ER, The Shield and The No. 1 Ladies Detective Agency (2008).

David Nessler, the political studies lecturer who interviews Josh throughout the episode, is played by Robert David Hall. Born in 1947, Hall had both of his legs amputated in 1978 when an 18-wheeler truck collided with his car. He suffered burns to 65% of his body in the same accident. Today he continues to walk with the aid of prosthetics. Hall has been a strong campaigner for the rights of the disabled in Hollywood, encouraging producers to cast disabled actors wherever possible and to not simply consider them for disabled characters only. Following the production of “Celestial Navigation” Hall was cast in the role of Dr Al Robbins in CSI: Crime Scene Investigation. What was intended to be a one-off guest appearance spun out into a regular role – between 2000 and 2011 Hall appeared in almost 250 episodes of the popular police drama.

Vaughn Armstrong plays Sgt MacNamara. Armstrong has made a career out of one-off guest appearances in TV shows, including Lou Grant, Wonder Woman, Simon & Simon, Remington Steele, Scarecrow and Mrs King, Cheers, Quantum Leap, Melrose Place, Dark Skies and Murder One. He has a particular connection to the Star Trek franchise, having guest starred on Star Trek: The Next Generation (“Heart of Glory”), Star Trek: Deep Space Nine (“Past Prologue”, “When It Rains…” and “The Dogs of War”), Star Trek: Voyager (“Eye of the Needle”, “Survival Instinct”, “Fury”, “Flesh and Blood” and “Endgame”) and Enterprise – where he played Admiral Maxwell Forrest in 18 episodes.

Former White House press secretary (and future West Wing political adviser) Marlin Fitzwater was one critic of the episode, citing Sam and Toby’s late night rush to free Mendoza from a Connecticut police station as the only major mistake of the first season. He said “for any White House to really try that would have been stupid. First of all, everybody in the White House would have gotten fired. The President would have gotten impeached, and the Supreme Court nominee would have to be dumber than an owl to ever break the law by getting out of a speeding ticket.’(2)

“Celestial Navigation” marked the second and final appearance for Edward James Olmos as Judge Mendoza. There were strong intentions to bring the character back, but then were abandoned after a pay dispute between Olmos and Warner Bros Television. ‘West Wing complained when they had to pay me,’ Olmos later said, ‘they felt they had a top show, and wouldn’t everybody want to do it for nothing? I said, “No, I don’t do anything for commercial television for nothing. You don’t need the help!” I’m a little too expensive for them. You can’t ask major talent to come on board without being able to support themselves.’(3) Following Olmos’ public criticism of The West Wing, series insiders were quoted saying Olmos received ‘well above scale’ for his two appearances on the show.

This is a great episode for comedy. The obvious highlight is C.J. Cregg coming back to the office after an emergency root canal. This element of the script evolved as a prank to play on Allison Janney, with Sorkin later saying ‘I just knew one way or another, I was putting cotton balls in Allison's mouth’.(4)

Sam and Toby’s attempt to navigate their way across Connecticut in a hire car is another comedy goldmine. It’s the classic comedy set-up, putting two disparate characters in a “locked room” environment, but it’s a classic set-up because it works. Toby’s grumbling cynicism is contrasted by Sam’s “chipper” optimism, particularly via Sam’s titular attempts at navigating by the stars. Similarly Josh’s disastrous attempt to conduct a White House press briefing works precisely because it is drawn from his own pig-headed arrogance.

“Celestial Navigation” is one of the more light-hearted instalments of the first season, but crucially it’s a light-hearted instalment that works. Unlike “Enemies”, where some of the humour feels shoe-horned into the characters, the comedy in “Celestial Navigation” is based within and flows from them. By this stage the series has worked out all of the kinks and issues of tone and style, and is fully hitting its stride. The characterisation is cemented across all the series leads (well, all apart from the troublesome Mandy), and with the addition of the non-linear story techniques it is all steam ahead towards the second season.