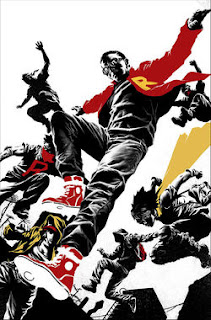 One of the more intriguing concepts of DC's new wave of titles is We Are Robin. In the aftermath of the Batman storyline "Endgame", Gotham City is in disarray. Hundreds of people remain missing. Thousands are homeless. The sewers and underground rail systems are filling up with people. Batman is reportedly dead. Crime is spiralling out of control. It's all the perfect environment for a group of disillusioned teenagers to take matters into their own hands, put on a mask and become the new Robin. All of them.

The book is written by Lee Bermejo, who is a very talented artist who has only recently broadened his skill-set to write comics as well. He does a very solid job here, introducing our protagonist Duke Thomas and drawing him into the new world of mass vigilantism. Duke is the perfect character to use as well, since he's already got a strong link to Batman himself via both "Zero Year" and "Endgame". He even cropped up in last year's Futures End tie-in as the official Robin of the future.

Jorge Corona's artwork has a nice angular look to it, sitting somewhere in the region of 100 Bullets, which seems a really good fit for the material.

Sadly there's not quite enough in this first issue to get a proper handle on the storyline. We get enough to be intrigued - and I'm very intrigued - but not enough to sell this one straight out of the gate. I'm certainly keen to give issue #2 a try. I just hope enough readers are willing to do likewise. This book has a lot of promise to it. (4/5)

Under the cut: reviews of Daredevil, Donald Duck, Empire Uprising and Jem and the Holograms.

We're basically reaching the climax of an 18-issue storyline, so bear with me: with the Shroud exploiting the Owl's abilities to expose Matt Murdock's entire life to the world, Matt has no alternative than to seek help from Wilson Fisk, the "Kingpin" who has recently relocated from the east coast to the west. The build-up is immense, and this issue's cliffhanger is agonising to read. Mark Waid has pretty much been writing the best run on Daredevil in more than 20 years. I'd have to re-read the famous Miller/Mazzuchelli run to be sure, but Waid and Samnee have really been giving them a run for their money. Whatever Samnee illustrates after this volume ends in two months, I'm there. This has been the most entertaining run, and I can't wait to see how it ends. Going by this issue, it won't be ending well for Daredevil. (5/5)

I have such fond memories of Walt Disney comic books as a child that I can't help but smile when I see IDW's new Disney titles on the shelves. This book follows the same pattern as other recent books: one main storyline, and two short back-up strips. The main part of this issue is the second half of "Shellfish Motives". It's a kidnapping story, albeit with the usual silly elements that crop up in a Donald Duck comic (in this case ludicrous servings of shrimp in special sauce). The dialogue seemed a bit off, using a few too many contemporary turns of phrase that felt oddly out of place for Disney characters. The story has been translated from Italian, of course, so it's impossible to know whether it's a writing issue or a translating one. The back-ups are beautiful though, and this remains a wonderfully enjoyable all-ages read. (3/5)

The political games between Golgoth's various ministers begin to spin out of control this issue, threatening the order he worked so hard to establish. It's a bleak, cruel world that Waid and Kitson have created in Empire - basically a dystopia where a Doctor Doom-style supervillain took over the world and killed all of its superheroes - and this issue feels darker and more cruel than the previous two. It also features a more prominent appearance by Golgoth himself, which was nice to see: he's got a great visual design somewhere between Marvel's Death's Head and Darth Vader. It's great watching this finely tuned civilization spin out of control: the question is how far and how hard will it go? (3/5)

Jem and the Holograms #4

The Holograms and the Misfits prepare for their respective gigs, while Kimber and Storm sneak off on another date. There's a wonderful symmetry to the dialogue in this issue, with many of the page and panel layouts doing something similar. Sophie Campbell's art is beautiful as always, and it's particularly enhanced by M. Victoria Robado's colours. The character designs in this book are fantastic, and this issue shows them off particularly well. Jem and the Holograms is, quite frankly, a hell of a lot better than a Saturday morning cartoon tie-in deserves to be. (4/5)
Posted by Grant at 5:28 PM