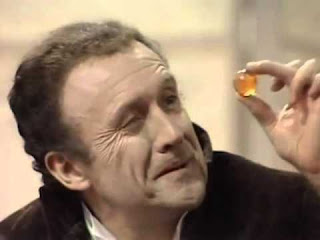 To aid in his attack on the Federation, Blake seeks the assistance of the Terra Nostra - a secretive criminal syndicate that has a strangehold over the outer worlds. When attempts to buy the syndicate's help end in violent failure, Blake chooses to take a different approach: destroying their stocks of the addictive and deadly drug "shadow" in an attempt to get their assistance by force.

"Shadow" is the first episode of Blake's 7 not written by creator Terry Nation. Instead, script editor Chris Boucher takes control. It's not surprising, given Boucher's extensive influence over the scripts so far, that his own effort is ultimately quite similar in structure and tone to Nation's. (In fact it makes one wonder just how much of the Season 1 scripts were actually written by Boucher.) Structurally it even forms two halves, much as Nation's episodes have done. The first half focuses on Blake, Avon and Jenna's attempts to negotiate on Space City. The second focuses on their attempt to destroy the stocks of shadow on Zondar. Where Boucher improves on Nation's formula, however, is with the inclusion of a third storyline that overlaps them both: Orac has been taken over by an alien intelligence and is threatening to destroy the Liberator. It makes it all feel like a whole episode, rather than simply two halves jammed together.

It is an episode with strengths and weaknesses, although I definitely think the strengths out-number the weaknesses considerably. The story is resolved with a stunning twist: the Federation controls the Terra Nostra. As Blake himself points out, if you want to control a society completely you need to control both sides of the law. It's the kind of bleak, dystopian angle that is the series' forte, and it goes a long way to making "Shadow" such a great hour of television.

Also great are the contrasting opinions of Blake's crew. Blake is willing to make a deal with the devil to get what he wants. Avon thinks it's a stupid idea to go around negotiating with untrustworthy gangsters. Gan, the most principled member of the entire team, is disgusted that Blake wants to lie with drug pushers and extortionists. It's the most material Gan's received in ages, and it both suits the character and is well played by David Jackson.

Orac's takeover of the Liberator, and growing threats to harm the crew should he be interrupted or opposed, is very effective. While it's ultimately revealed that it's an alien entity at work using Orac as a tool, we do not initially know this to be the case. Orac has only been in the series for two episodes, and it's very easy to assume the computer itself is simply a dangerous and malevolent force on the ship. Some sequences in this storyline aren't so convincing, particularly the little psychic 'moon discs' on the planet Zondar and Cally's weird imprisonment in a white box.

The guest cast vary in quality. Derek Smith is outstanding as Largo, the condescending and sadistic representative of the Terra Nostra. Less successful are Karl Howman and Adrienne Burgess as Bek and Hanna, two destitute scavengers dressed in rags who have been blackmailed to do Largo's bidding. It's not the fault of the actors: they've been dressed ridiculously, and given fairly risible dialogue. Burgess in particular suffers, forced to play a shadow addict like a character out of a teen educational film.

Altogether, however, "Shadow" is an intelligent and distinctive episode with a lot of enjoy and recommend. It leaves Season 2 with an immaculate record: two good episodes, and nothing bad so far.
Posted by Grant at 8:25 PM