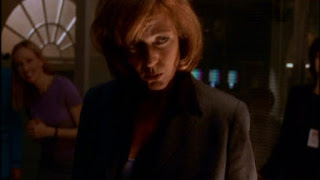 In “Six Meetings Before Lunch”: Mendoza is finally confirmed as Associate Chief Justice, Zoey is ambushed by a tabloid journalist, Sam and Mallory debate private school vouchers, Josh meets with an assistant attorney general candidate who favours financial reparations for slavery, C.J. must summon up the courage to stand up against the President, and Mandy is on the hunt for two pandas for the National Zoo.

In a delightful contrast to “The White House Pro-Am”, “Six Meetings Before Lunch” is an outstanding success, delivering an interwoven series of storylines that combine comedy and drama and successfully utilise the entire cast of the series – something that, until now, has been a relatively rare occurrence.

While writing this episode, Aaron Sorkin was trailed by journalist Sharon Waxman, who wrote an article – “Art Meets Politics” – about the production process of The West Wing. When discussing how his storylines came together, Sorkin used research made by the writing team on slavery reparations as an example. ‘I’ll look at the research,’ Sorkin said, ‘and start talking out loud: “That looks like a steal to me?”, “Where would we get the cash?” Once you get two people to disagree about something, you have a scene.’(1)

Assistant Attorney General for Civil Rights nominee Jeff Breckenridge was played by Hollywood veteran Carl Lumbly. Best known a few years later for playing secret agent Marcus Dixon on Alias, Lumbly had also starred in the short-lived superhero series MANTIS, as well as Detective Mark Petrie in Cagney & Lacey. Josh’s conversation with Breckenridge is The West Wing at its best: two intelligent characters debating a genuine political issue with clarity, humour and heart. It’s one of the finest elements of the episode.

The other great element is Zoey’s confrontation with a tabloid journalist, Edgar Drumm, and C.J.’s subsequent efforts to ensure a minor altercation doesn’t turn into a major news story. Christopher Wynne played journalist Edgar Drumm, who ambushes Zoey in the kitchen of the university cafeteria. Wynne has appeared in a string of films and television dramas, usually in small bit parts. In 1990 he played one of Buford Tannen’s outlaws in Back to the Future Part III. He has also appeared in Speed 2: Cruise Control, Murphy Brown, ER and : Texas Ranger.

Zoey’s classmate Stacey was played by Lindsay Sloane. Sloane had previously played Valerie in Sabrina the Teenage Witch, and later starred in several short-lived drama series including The Stones and Grosse Point.

C.J.’s doubts over challenging the President culminate in a nicely played stand-off with him in the Oval Office. It is a good piece of character development for C.J., who has been somewhat on the outside of the President’s inner circle since the season began (particularly in “Lord John Marbury”).

Of course the episode enables us to see two sides to C.J., since she begins it miming to Ronny Jordan’s “The Jackal”. C.J.’s rendition of “The Jackal” at the episode’s opening was inserted into the script after Sorkin witnessed Allison Janney giving the exact same performance after a shoot earlier in the year. ‘I had done some impromptu lip-synching in my trailer that Aaron happened to be privy to,’ Janney explained, ‘and he wrote that into an episode. I’m kind of shy, but the more he gets to know me, the more I see familiar things in my character.’(2) “The Jackal” is by Ronny Jordan, and can be found on the album The Quiet Revolution.

C.J. isn’t the only character to get musical this week – Toby briefly sings “Put on a Happy Face” from Bye Bye Birdie during his brief period of post-confirmation happiness. It’s a great bit of comedy to see Toby so happy.

“Six Meetings Before Lunch” was one of many Sorkin-written episodes of The West Wing whose script was unfinished when shooting began. Sorkin completed work on later scenes while earlier ones were completed.

A scene written late in the day to pad the episode out had Zoey dragging Charlie into a doorway for a brief, passionate kiss. Much to the production team’s surprise, they received hate mail over featuring a bi-racial kiss. ‘Frankly,’ admitted Sorkin, ‘the most surprising thing is that these people were watching our show, and not WWF Smackdown. In my world, such romances are not particularly noteworthy. Having said that, I created an extreme case (in the show, Zoey begins receiving death threats for dating Charlie) to remind us that it’s not completely irrelevant.’(3)

“Six Meetings Before Lunch” was directed by Clark Johnson, a former actor and another alumnus of Homicide: Life on the Street. Following his work on this episode Johnson would make a big impact as a director on The Wire, The Shield (including the first and final episodes) and Sleeper Cell. In 2003 Johnson directed the hit action film SWAT, starring Colin Farrell and Samuel L. Jackson. In 2006 he directed the Michael Douglas thriller The Sentinel. In 2013 Johnson returned to acting, playing the role of Senator Robert Bettencourt in Alpha House.


If you want to read more, all West Wing posts have been indexed here.