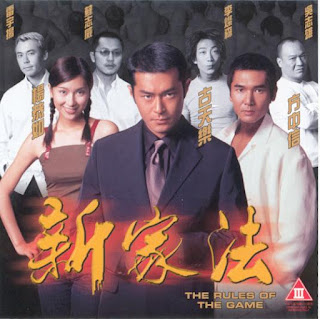 David (Louis Koo) runs a small garage with the help of his friends Becknam (Edmond So), Chun (Sam Lee) and Ha (Ronald Wong). Becknam's sister Ann (Kristy Yeung) is romanced by a local triad leader named Shing (Alex Fong). When David and his friends try to intervene Chun is badly beaten and left in a vegetative state. To make matters worse, to overcome a gambling debt David, Becknam and Ha are forced to join Shing's gang. Only once they are well-established in the organisation does David's true intentions become clear, sending him on a mission of revenge to kill Shing for what happened to Chun.

Rules of the Game is one of numerous triad-based melodramas that flooded the Hong Kong film market in the wake of Young & Dangerous. They all tended to run along a similar formula, peppered with cool fashions, montage sequences and wild street brawls with young Chinese man hacking each other up with machetes and meat cleavers. Rules of the Game is no different. It's clearly produced on a lower budget than its contemporaries, and indulges in more graphic depictions of violence, but really all in all it's another duplicate triad flick that may as well have rolled off a production line.

Louis Koo is a strong actor, but here he's given little to do except alternate between brooding anger and a sort of petulant sulking. Kristy Yeung comes off even worse: not only does she lack much material with which to work, her character arc requires her to see one of her best friends beaten into a coma by a violent gangster and then fall passionately in love with the self-same criminal.

It's Alex Fong who gets the best part as the crime boss Shing, who gets to vary from brutal violence to charming romance in a nuanced and fascinating fashion. He performs the role well - perhaps a little too well, since it's occasionally difficult not to side with him against the film's ostensible heroes. Simon Lui is similarly strong as one of Shing's key lieutenants. Lui is one of the work-horses of Hong Kong cinema: in 1999 he appeared in 19 feature films as well as Rules of the Game, and is one of those actors you constantly point at recognise without ever quite working out where you have seen them before.

In terms of production it really is a scrappy kind of a film. It's clearly been shot on the fly. Like many Hong Kong films of the period the dialogue has clearly been re-recorded during post-production. The musical score is the worst kind of twee electronic warblings.

Much of the violence is so over-the-top and tacky that it's impossible to treat seriously. That's all save for a completely arbitrary and deeply unpleasant sexual assault depicted in the film's final minutes. It comes out of nowhere, doesn't link into the main storyline, and is depicted in just about the most vile way I've seen. There's a serious responsibility that comes from depicting these sorts of ugly violent acts on screen, and director Steve Cheng has completely abrogated that responsibility. It almost derails his already fairly disappointing film. This is the only film I've seen from Cheng. He scored a bigger hit in 2000 with Violent Cop, and his other films include such titles as Erotic Nightmare (1999), Rape Trap (1998) and City of SARS (2003). Make of those titles what you will.

So why even bother? I suppose there's always some appeal in this kind of broad melodrama, and fans of the genre will likely forgive its many shortcomings and enjoy the film where they can. It's awfully cheap, however, and crushingly ordinary, and in that one late scene really unpleasant to watch. Viewers with any real sense of discriminate taste should likely avoid it, and leave its simple charms to a more easily entertained audience.
Posted by Grant at 7:52 PM