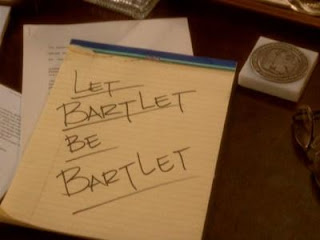 In “Let Bartlet Be Bartlet”: a hard-hitting memo is leaked that outlines all of Bartlet and his staff’s weaknesses; Sam meets with representatives of the military to discuss changing the long-standing “Don’t Ask, Don’t Tell” policy; Josh sees an opportunity when two members of the Federal Election Commission resign; and Leo finally confronts Bartlet over the President’s “middle of the road” tactics.

It is an episode that seems to pull together the entire series into a single, driven narrative: for all of their idealism and small victories, the truth remains that the Bartlet administration is stuck in a rut. After more than a year in office, the President has little to show for it. He shies away from his own agendas, leaving his staff dispirited and increasingly despondent. By the episode’s climax Bartlet and his staff are renewed and invigorated, eager to make a difference with the remaining two-and-a-half years of the Bartlet Presidency. This is what the series is about for the rest of the year: Aaron Sorkin takes the momentum of this week’s events and uses it to power through the remaining three episodes.

Leo confronting Bartlet over how he’s played it safe since becoming President is yet another bit of The West Wing that seems to have its origins in The American President. In the film, President Shepherd’s Chief of Staff A.J. chastises him for shying away from a character debate with his election rival. In The West Wing, Leo chastises Bartlet from shying away from everything. It’s a wonderful scene in both the film and this episode: the Chief of Staff dropping his role, and speaking to the President as a lifelong friend.

It is not a season devoid of realism either – John Podesta, Bill Clinton’s fourth and final Chief of Staff, was asked if he could have such an argument in real life. ‘I could,’ he said. ‘I’m tough with the president, but I am never condescending. But if he’s wrong, I’ll fight him. And he’s pretty good about accepting that. If he respects you, he expects you to fight.’(1)

Mandy returns to action here, in a way that makes it suddenly apparent how invisible she’s been in the series so far. Interestingly, it’s in a storyline that pushes her character outside of the President’s circle while giving dramatic material to Allison Janney and C.J.

Leo sends Josh to sound out the Republican leadership about the President’s choices for FEC Commissioners, which leads to a wonderful scene for Josh – the character’s at his best when behaving like Bartlet’s attack dog, and he gets plenty of ammunition to play with here.

When David Letterman resigned from NBC’s Late Night to set up a rival series on CBS, Paul Provenza was one of the people short-listed to replace him. Provenza lost the job to Conan O’Brien.

A few eyebrows were raised at the name of one of Bartlet’s nominees for FEC Commissioner, Patty Calhoun, a name shared by the then-editor of Westword – an independent newspaper published in Denver. When asked by Rocky Mountain News what she would do if appointed to the FEC, the real-life Calhoun said ‘I would condense the presidential campaign to about a day.’(2)

While Josh declares war on the Republican leadership, Sam and Toby meet with representatives of the armed forces to discuss repealing “Don’t ask, don’t tell”. This controversial policy was installed during the administration, and replaced an outright ban on homosexuality in the military with a policy of not asking the sexuality of LGBT soldiers in return for those soldiers remaining in the closet. Arguments against “Don’t ask, don’t tell” are unnecessary here: they’re all explained in the episode itself.

“Let Bartlet Be Bartlet” was directed by Laura Innes, an actress turned director whose performance as Dr Kerry Weaver on ER had won her considerable acclaim. Like Ken Olin in thirtysomething (see “Take Out the Trash Day”, above), Innes started directing on her own series before expanding to other dramas. She directed 12 episodes of ER in all, as well as six episodes of The West Wing: “Let Bartlet Be Bartlet”, “Shibboleth”, “Constituency of One”, “The Dover Test”, “The Wake Up Call” and “Two Weeks Out”.

Despite her fame on ER (she was ultimately the show’s longest-running regular actor, filming 250 episodes over 11½ seasons), Innes was a complete unknown to Martin Sheen. ‘My wife asked me who was directing,’ he told TV Guide, ‘and I said “Some little girl. Hell, she looks about 14 years old, I don’t know her name”. She looked at the call sheets and said, “You a--! Laura Innes is directing! She’s the best thing on ER, man. You’d better go back and behave yourself.” So I did what my wife told me, and I listened to everything [Innes] had to say.’(3)

“Let Bartlet Be Bartlet” is a strong episode, and one that gives the series much-needed structure as it heads into the home stretch. There have been a few hiccoughs along the way – notably the forced abandonment of much of the Roberto Mendoza storyline – but from here on in The West Wing makes the climb to a rousing first-year finale.