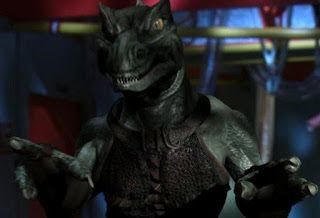 In a bleak parallel universe, Commander Archer has commandeered the USS Defiant and plans to use it to take over the Terran Empire. Meanwhile T'Pol, inspired by the records of the Federation in the Defiant's data banks, is preparing an armed insurrection against her human overlords.

To its credit, Part 2 is a better episode than Part 1. Particularly interesting is Archer's reaction to reading about his alternative self back in the regular series: the 23rd century remembers Jonathan Archer as a diplomat and explorer, and a pivotal figure in the foundation of the United Federation of Planets. The mirror Archer is so affected by this that he begins to imagine his alternative self everywhere he goes, goading and mocking him every time he doesn't get his own way. Scott Bakula's clearly having a lot of fun playing the increasingly unhinged evil Archer, and a fair bit of that fun does rub off.

The Gorn incident is a weird diversion that appears to exist solely for the writers and the production team to create a motion-captured CGI Gorn for nostalgic purposes. They couldn't do it in a regular episode - "Arena" makes it pretty clear that humans have never seen the Gorn before - so they apparently squeezed it in here for the hell of it. The series budget doesn't really accommodate the character, so it's not only unnecessary it's a bit shaky to look at as well.

Overall the episode just feels like a fairly pointless diversion. The cast might enjoy playing different characters - certainly Linda Park does a great job with Hoshi - but I'm not sure it's really been worth two weeks of the audience's attention. It's fairly impenetrable stuff to the casual viewer, and as a prequel to well-known episodes there's not a lot of latitude to do anything significant with the plot. All up, it's simply rather dull. Had Enterprise continued to a fifth season there were loose plans to run a whole string of episodes inside this parallel continuity. I'm fairly relieved they never got the chance.

You can definitely skip this two-parter, unless you're a completist. It leaves us 19 episodes into Season 4, with only eight decent episodes to show for it. The quality ratio declines again to 42 per cent.
Posted by Grant at 6:45 PM