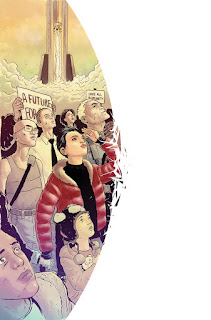 Imagine if a giant asteroid was about to hit the Earth, and the world's combined governments actually had the ability to get people off the planet into giant orbiting spacecraft until the planet settles down. Now imagine they only have time to get a certain number of people off the surface in time, and they have made the collective decision to leave anyone with a criminal record behind. Elena Marlowe is a wife and mother with a past she's worked very hard to keep a secret, and in the final days before the Earth is devastated she's managed to score a fake passport and a seat on the last space elevator with her husband and child. Now all she needs to do is get past security.

This is a outstanding first issue, containing a great initial premise, a strong central character and a fantastic cliffhanger ending. The book is written by Frank J. Barbiere (Five Ghosts) and illustrated by Christopher Peterson, and they both deliver some amazing work. Peterson in particular has his work cut out for him, and he excels at drawing fantastic facial expressions and emotions for a variety of characters in an awful, inescapable situation.

This is a four-issue miniseries, so it's unlikely to break the bank. I strongly recommend giving it a chance. From this first instalment it's shaping up to be a really interesting story. (5/5)

Under the cut: reviews of Action Comics, Batman Beyond, Dead Drop and The Woods.

Let's get the annoying bit out of the way: to fully understand this issue's starting point, it refers you to events in Superman #41. That sort of thing always annoys me. To make matters worse, at the issue's climax Clark sees a crisis and ponders that it's obviously the result of events that happened to him recently - and a small box on the page informs the reader that the events to which he's referring took place in Superman #42, which isn't even available until July. What the hell, DC? What. The. Hell. That annoyance aside, this is a great issue. For reasons I actually don't know (and this issue doesn't tell you), Superman has lost the bulk of his powers. He's still pretty strong, and he's back to leaping tall buildings in a single bound, but he can't fly and he's feeling cold, heat, exhaustion and hunger in a way he never has before. This issue basically sets up the new status quo, a return to the jeans-and-t-shirt look (his Kryptonian armour of the New 52 era has been taken from him), and a new potential live interest with double-L initials. It's obvious this new status quo is temporary, but from this issue it seems to be a very promising story arc. (4/5)

Batman Beyond was a great animated series set three decades into Gotham City's future, and while the TV series is long gone DC has continued to try and find ways of incorporating the setting and characters into the regular DC Universe. This book follows on from the recent weekly series Futures End, so like Action Comics it's a little difficult to catch up and work out exactly what's going on. To his credit Dan Jurgens packs in a lot of exposition without making the book feel too wordy: Terry McGinnis, the Batman of the future, is dead. In his place is a twentysomething Tim Drake from five years into our future. Trapped 30 years into his future, he now fights to save the human race from the all-powerful AI known as Brother Eye. First of all this is a needlessly complex and confusing set-up for a new comic book that would likely stop it in its tracks saleswise, were it not a Batman title. The issue itself is engaging and relatively promising, although it's going to have to work fast to draw in an audience that isn't already familiar with what's going on. (3/5)

The premise of Dead Drop seems pretty simple: in this four-issue miniseries a deadly alien virus has been stolen, and a successive number of superheroes race to trap the thieves before the virus falls into the wrong hands. Last issue focused on X-O Manowar, and this issue hands the chase over to Archer of Archer & Armstrong fame. There is quite literally nothing about this issue that I don't like. The chase is told in a visually arresting and entertaining fashion. The panel layouts are clear but creative. Gorham's artwork is great to look at, and Kot's script is brimming with humour and a clever use of flashbacks. This is a really fun miniseries. (5/5)

An alien power periodically snatches entire communities of human beings from the Earth and deposits them on a strange moon somewhere else in the universe. Its most recent target has been an American high school. This issue picks up the story one year after the students first arrived, and is cleverly written by Tynion to act almost as a fresh #1. If you've got any interest in this book, he's made it very easy for you to jump on and try it out. The characters have all moved on and developed in the missing 12 months, in interesting and sometimes troubling ways. There's a new threat on the horizon as well; it looks like one of the earlier communities snatched decades ago has travelled to the school with violent purposes. I really like Michael Dialynas' art on this book, which is that nice blend of the abstract, sort of cartoony aesthetic with very realistic moments and expressions. This is a great science fiction book that deserves a broader audience. (4/5)
Posted by Grant at 6:48 PM