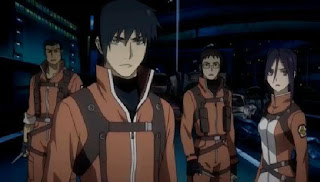 In response to an attack by invisible supernatural creatures, Japan's Ministry of Defence dispatches its elite Paranormal Disasters Countermeasures team. Using their own innate psychic powers this military team can see the invisible monsters than ordinary humans cannot. When a second, much more devastating, creature attacks near Tokyo Tower, the team mobilises again to lure it into the city's aqueducts to destroy it.

Ga-Rei-Zero is an odd thing, or at least its first episode is. The initial impression it makes it not a good one. The episode suffers from extraordinarily generic designs and music, not to mention by-the-numbers characters and cliché-ridden dialogue. It's the sort of set-up that's been so many times in anime: the supernatural monsters running around Tokyo, versus the conflicted team of misfits who are the only ones capable of stopping them. In many respects it's the anime equivalent of a CSI or NCIS: you know going in exactly what you're going to get, and while it doesn't do anything badly watching it hardly feels like a justifiable use of one's time. And then...

It's really unexpected, and discussing it completely spoils the episode. In short: just as the team appears to have defeated the second and larger of the supernatural incursions, a mysterious katana-wielding woman appears and brutally slaughters them all. It's a short sequence that transforms a by-the-numbers sort of military-monster adventure into stark, graphic horror. There's a lot of blood. There's no shortage of panic. Body parts are dismembered. There's not any survivors either, apparently, which begs the question: what the hell am I watching?

On the one hand it's a tremendous waste of time, spending 25 minutes building up a group of fairly run-of-the-mill protagonists only to murder them all in the final minutes. On the other hand it's a gambit that has certainly attracted my attention. What the hell is this series about? Who's the protagonist? Is someone not as dead as they look, or will they return as a ghost or be reincarnated, or is the shadowy swordswoman murderer actually our hero? It's a high risk strategy in a lot of ways, but for me at least the strategy has paid off. Until the final two minutes I was planning to move on and not bother with any other episodes. With those two minutes passed I feel I have to at least sample one more episode to try and get my head around things.

Technically the series is not outstanding, with fairly generic character designs and some risible computer-generated monsters that visually clash with the hand-drawn look of the backgrounds and human characters. That ending, though. Surprising, memorable, and a brilliantly effective hook. It's a bad episode, all things considered, but I can't deny I want to know what's going on. Let's see where this show goes.
Posted by Grant at 9:01 PM