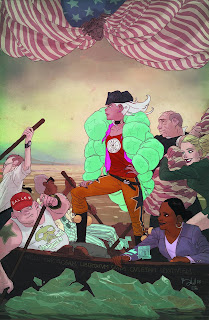 All the way back in 1973 Joe Simon and Jerry Grandenetti created Prez, a short-lived comic book in which the USA changed its electoral laws to give teenagers the vote. As a result of that change teenager Prez Rickard became the youngest President of all time, backed by a shadowy businessman named Boss Smiley who had a spherical yellow smiley face for a head. It was one of the most bogglingly weird things DC ever published, and readers really didn't catch onto it. The fourth issue, in which the White House was invaded by vampires and Prez relied on a Native American bodyguard in a feather headdress to save him, was the last.

Prez had a weird footprint on the comics-reading audience, though. The book may have crashed and burned, but it remained fondly remembered. Neil Gaiman even incorporated characters from the book into a story arc on The Sandman. Now with DC Comics vigorously shaking its back catalogue upside-down for loose change, we're getting an all-new Prez. It's suitable weird, and reasonably good.

It's the year 2036 and not only can teenagers vote, voting can be done via social media. A prostitution scandal takes out the lead candidate (the scandal is that he's prostituting himself, not that he's having sex with prostitutes), and 16 year-old Beth Ross - using the username Corndog Girl - becomes the new front-runner for President. It's a scattershot near-future satire, with big business running government from behind the scenes, reality TV running out of control, and political talk shows featuring up-to-the-second opinion polls during interviews.

Ben Caldwell and Mark Morales provide some great artwork, emphasising the comedic nature of the book. It's not perfect, but it's surprisingly close to the mark. I don't see Prez finding an audience with any more ease than it had in 1973, but while it lasts it's looking pretty entertaining. And hey DC, what's with the lack of creator credits for Simon and Grandenetti? (4/5)

Under the cut: reviews of Black Canary, Doctor Fate, Ms Marvel and Robin: Son of Batman.

A lot of the new titles in DC's current mini-relaunch were commissioned thanks to the success of the recent Batgirl re-imaginings, taking that character out of Gotham and into Burnside, putting her into university and giving her a whole new supporting cast. Part of that series' last arc included putting Dinah Lance, aka Black Canary, into her own indie rock band. It's where we pick up her adventures in Black Canary #1. Using the pseudonym D.D. she is leader singer of a band while simultaneously getting into violent brawls with criminals at every venue. Venue managers are refusing to pay the band, the band's getting upset, and Dinah keeps finding crimes she has to fight. It's a wonderfully odd sort of superhero book, and arguably complete hipster-bait, but I liked it a hell of a lot. It's smart, strikingly different, and a lot of fun. The script seems to owe almost as much to Marvel's recent Hawkeye monthly as it does Batgirl, and of course it's poached artist Annie Wu as well. Check out the cover image: if that looks like the sort of comic for you, it probably is. (5/5)

While I love Sonny Liew's artwork in pretty much everything he does, I can't say I'm anywhere near as enthused by Paul Levitz's writing. This reboot of the classic DC superhero begins on pretty shaky ground, with a small text box letting the reader know that the first eight pages of the story can be read online for free - not a good first impression. The rest is all rather generic and lacklustre, to be honest: Egyptian gods, a supernatural storm hitting New York City, and a young man in a hooded sweatshirt being given a mystical gold helmet. There's no strong climax or cliffhanger here, and thanks to pre-launch shenanigans there's no first art either. It's all just a bit of a mess. Two points for Liew's art, but that's really the only thing here to recommend. (2/5)

Alarm bells went off when I noticed this issue was a Secret Wars tie-in. Thankfully it's still a great and entertaining issue even without my knowing anything in particular about that miniseries. In short: the sky has turned red and another planet looks set to crash into New York City, and Kamala Khan is running herself ragged trying to get her New Jersey community to the safety of their high school (magically protected by Loki a few issues back). It's solid stuff, with Adrian Alphona's art giving everybody such wonderfully emotive expressions and G. Willow Wilson's script combining good character development with fast plotting, a continuing storyline and a pleasant cameo at the issue's climax. I don't like crossovers and miniseries tie-ins, but if they must be done this is pretty much the best way that you can do it. (4/5)

For the first time in about six years DC are publishing a solo Robin book again. That in itself makes me pretty happy. I've always been a fan of Robin in all of his (and her) iterations, and I've particularly enjoyed reading the exploits of 11 year-old trained assassin Damian Wayne: smart, rude, cocky, arrogant, and weirdly adorable. Patrick Gleason, who pencilled the entire New 52 run of Batman and Robin, takes over writing duties as well as artwork with this new book. It teams Damian up with Goliath, a huge Man-Bat developed by Ra's al Ghul all the way back during the Grant Morrison run on Batman. Artwise it's great, with Mick Gray continuing to do a great job with inks. Story-wise it feels a little murky. This book is relying on quite a bit of pre-existing knowledge on the reader's part, which is never a good idea for an issue #1. Hopefully the writing will smooth out and improve in future months. (3/5)
Posted by Grant at 10:23 PM