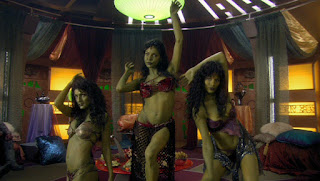 And what an episode it is. The Enterprise is intercepted by an Orion trader, who offers Captain Archer the chance of forging a long-term peace between Earth and the Orion syndicate. As a token of his good faith, the Orion captain gives Archer a gift: three Orion slave girls. Once onboard the Enterprise, the three green-skinned, half-naked women begin driving the male members of the crew into an aggressive sexual frenzy.

It's hard to say if "Bound" is the worst Star Trek episode of all time. I'm pretty sure it's the worst Enterprise episode I've ever seen, but if I broaden it out to the franchise as a whole it's competing with Dr Crusher fighting Scottish ghosts, or 19th century Irish space colonists, or Janeway and Paris hyper-evolving into space newts that then have sex. So let's not exaggerate by calling it the 'worst-ever', and just rest assured that it's one of the 'worst-ever' episodes. Ever. As in, really, really awful. Back in 2005 when UPN axed Enterprise I remember being sad that Star Trek was off the air again. Had I actually seen this episode back then I'd have sent the network a hand-written note of thanks. This is terrible television.

It's all just so aggressively, intolerably juvenile. The three Orion slave girls pout and pose their way across the ship in lingerie, with previously intelligent and competent officers all hanging out their tongues and getting lewder by the minute. Sure, it's all rapidly explained that there's an alien pheromone having an effect, but that doesn't explain why the female members of the crew aren't quicker to take action.

The most damning indictment I can make about this episode's sexual politics is that this episode would have been too sexist and utterly repugnant to even make it onto the original Star Trek in the 1960s. They might have tried a similar story, but it would never have scraped the bottom of the barrel so forcefully as this one does.

I feel sorry for the cast. I feel sorry for the viewers. I have nothing but stern disapproval for writer Manny Coto, who should have been taken to a quiet corner and told "No" in an authoritative voice. I really do hope that during the Season 4 wrap party, when the freshly unemployed writing team cradled their drinks and asked each other why Paramount and UPN killed their show, that someone with intelligence and critical faculties was there to point at "Bound" and tell them "This. Because of episodes like this."

17 episodes into the season. Eight good episodes. The quality ratio drops down to 47 per cent.