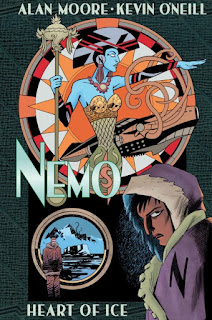 In 1925 Janni Dakkar, daughter of the legendary Captain Nemo, has taken command of the submarine Nautilus. Pursued by a team of American bounty hunters, she follows in the path of her father's notorious failed expedition to Antarctica - uncovering a mysterious inhuman civilization as she goes.

That's the basic premise of Nemo: Heart of Ice, a relatively self-contained graphic novel written by Alan Moore with art by Kevin O'Neill. It's a spin-off from their immensely popular The League of Extraordinary Gentlemen, that ran for two series at DC Comics before expanding to include The Black Dossier and the three-volume Century sequel. The idea behind the League books, in case you've never read them nor seen the fairly dire 20th Century Fox film adaptation, is that all of the protagonists of literature live in the same fictional world, and not only interact with one another but form superhero-like teams capable of defending the world against super-villains and monstrous invaders.

Heart of Ice is the first of three spin-off books focused on Nemo's daughter, and to a large extent it brings back much of what made the original volumes so popular. A key part of the enjoyment of a League book is spotting all of the literary cameos and allusions. Heart of Ice is no different, weaving in elements from H.P. Lovecraft, Herman Melville, and even Edward Stratemeyer's Tom Swift novels.

For me the real star of the book is not Moore but his artist Kevin O'Neill. His sharp, jagged character designs have always made The League of Extraordinary Gentlemen an eye-catching and effective series, and while this book perhaps feels a little less intricate and detailed than earlier volumes it still looks fantastic. Ben Dimagmaliw's colours complement the art exceptionally well, as does Todd Klein's masterful lettering work.

I think there is a point with Alan Moore's League works, and I do think we've well passed that point, where the elegant weaving a literary sources into a knowing, intricate graphic narrative passes away, and all that's left is a simple comic book pastiche. While this book continues to mash numerous elements together, this time around they feel like exactly that: a mash-up, without any of immense complexity that marked the original two League volumes as such strong works. This book is fun to an extent, but only to that extent. Readers expecting something to rank alongside Moore's best works will likely go away disappointed. Readers seeing Moore finally tackle proper H.P. Lovecraft-inspired Cthluloid horrors will probably smell a missed opportunity: this feels like a semi-cynical cash-in, produced with talent but possibly not with enough enthusiasm.

Two more volumes follow: The Roses of Berlin and River of Ghosts. If I get the chance I might check them out to see if this odd little side franchise improves.
Posted by Grant at 10:56 AM