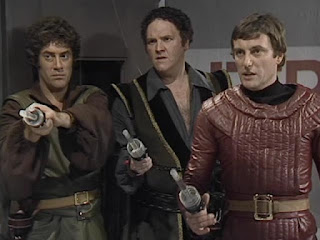 Supreme Commander Servalan has negotiated with the legendary Clone Masters to have two clones made of Roj Blake. At the same time an emotionally unbalanced genius has escaped from a Federation weapons development facility, taking the mysterious IMIPAK with him. What links these two unrelated events to Blake and his team on the Liberator?

Seeing these disparate plot threads meet one another takes almost the whole running time of "Weapon", an episode that feels like two different stories wrestling each other for a full 50 minutes. There are several intriguing ideas at work here, but writer Chris Boucher fails to tie them together sufficiently. It's a frustrating experience as a result, full of wasted opportunities, disappointing plot developments and ridiculous costumes.

They are hilariously ridiculous costumes. The fugitive inventor Coser (John Bennett) stomps around an abandoned Federation outpost in an open-necked shirt laced with brocade and boasting a bizarre wizard-like high collar. His companion Rashel (Candace Glendenning) wears a variant of the same. Meanwhile Servalan struts around in a combination of white mesh, dangling crop tops and a chicken wire necklace. Space Commander Travis, thankfully, seems to stick to his usual tight black outfits and unconvincing eye-patch.

Travis is indeed back. Scheduling conflicts prevent original actor Stephen Greif from returning, so from here onwards the part is played by Brian Croucher. He's a much camper, more theatrical version of the character, less pragmatic and more likely to spin off into sulky rages. I vastly prefer the original Travis, but in Croucher's defence it's not really his fault. For whatever reason Travis is written rather poorly in Season 2; less of a driven military officer and more of a mad moustache-twirling villain.

Coser isn't much better. He's a violent, unpleasant sort of a character, shouting at his companion and ex-slave Rashel for being so subservient and then getting physically violent with her when she doesn't do as he asks. Rashel is more likeable, but the script does not give her much to do,

There's a huge amount of potential in the mysterious Clone Masters whom Servalan visits, but it's all put aside in favour of lengthy scenes of Coser being unpleasant. When the clone of Blake is finally implemented in the plot, it's done so briefly one wonders why Boucher bothered to include the plot thread at all. It's a bit of an unbelievable clone as well: it wears exactly the same clothes that Blake elects to wear on the same day. This sort of laziness really stands out in the episode.

Scott Fredericks is rather entertaining as Carnell, a psycho-strategist employed by Servalan to guess Coser's motives and actions. He's easily the best part of the episode, and gets most of the good lines. The actual Blake and the rest of the regular cast barely get to cameo in their own series this week. They're not seen at the beginning, and they run away halfway through their own climax.

All in all the episode is a tremendous disappointment. It leaves Season 2 with two good episodes out of three so far: a quality ratio of 67 per cent.
Posted by Grant at 6:47 PM