Star Trek: Enterprise: "In a Mirror, Darkly, Part I" 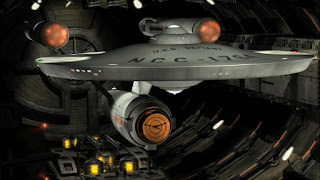 Season 4 of Enterprise has been such a messy cavalcade of continuity references and indulgent prequels that I'm finding the start of each episode a weirdly exciting moment: precisely what beloved older episode of Star Trek is going to get crassly exploited and shoe-horned into a new back story this week? "In a Mirror, Darkly" doesn't disappoint in that regard. It's first five minutes are among the most attention-grabbing the series has ever done.

We unexpectedly begin during the climactic moments of the 1996 feature film Star Trek: First Contact. A Vulcan starship descends to the ground, and its occupants step out to greet the astonished humans. Zephram Cochrane (James Cromwell) greets the Vulcans, as he does in the film, only to then pull out a gun, blow the Vulcans away, and lead the frantic looting of their ship. We then jump to a revised set of opening titles with ominous music, tracking in images the development of the militaristic, cruel Terran Empire.

Yes, the Season 4 curse of repeated continuity pornography continues in this prequel to the Star Trek episode "Mirror, Mirror". We don't see the regular characters in this episode at all, instead the cast each play mean, ultra-competitive parallel universe versions. Archer is the first officer of the Enterprise under the command of Captain Forrest (a returning Vaughn Armstrong), chafing at his rank and waiting for the first chance to betray his captain and commandeer the ship. Dr Phlox seems more intrigued by torture than medicine. Commander Tucker is scarred by years of radiation damage in the engine room. Lieutenant Sato is an overtly-sexualised girlfriend to whatever senior officer she thinks is going to advantage her the most.

Tensions on the ship blow over when Archer launches a plan to infiltrate Tholian space and recover a Starfleet vessel that the Tholians have discovered drifting in space. Not only is it a human-made ship, it's from another universe and 100 years into the future. That's right, Star Trek fans: it's the USS Defiant, lost in a spatial interphase and unexpectedly deposited in the history of the mirror universe. Not content with making a prequel to "Mirror, Mirror" writer Michael Sussman has created a sequel to "The Tholian Web" at the same time.

This is a ridiculously self-indulgent episode. The actors get to lark about being evil versions of their regular characters. The designers get to construct replica sets of the original Star Trek ship corridors and bridge. The writers get to play about writing new bits for old episodes. It beggars belief. Once onboard the Defiant, Archer and his crew change out of their spacesuits and into 23rd century Starfleet uniforms. It's ostensibly because that's what clothing was available to them, but basically it's so the series can show T'Pol (Jolene Blalock) in a blue minidress.

T'Pol's regular costume isn't much better. For reasons difficult to explain outside of 'UPN told us to make the show as sexy as possible', all of the female officers of the mirror universe wear silly crop-tops that show off plenty of skin. Coming straight on the heels of "Bound" it really does feel like Enterprise is going out of its way to objectify women. It's not a good look.

The bottom line? The characters are unlikeable. The relationship with the rest of the series is non-existent. The tie-ins to previous episodes is unnecessary and eye-rollingly tedious. This is a terrible episode - and what's worse it ends on a cliffhanger. There's another 40 minutes of this rubbish to go. Eighteen episodes into the season, and only eight have been good. The quality ratio drops again, to just 44 per cent.
Posted by Grant at 9:09 AM