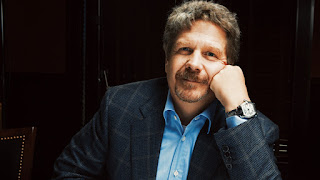 The West Wing was born over what was supposed to be a casual lunch in 1997.

With a developing career in motion pictures, Aaron Sorkin was not even looking at developing properties for television. Years later, when The West Wing was about to go off the air, he said ‘It never occurred to me to try to write a TV show. I had nothing against it – I just didn’t know anything about it.’(1) It was Sorkin’s agent who pushed for the writer to meet with television writer/producer John Wells. Sorkin was already a fan of Wells’ work, and agreed to an informal lunch with him. By Sorkin’s later admission, the idea of actually producing a television drama with Wells had not actually entered his mind.

John Wells was and remains one of the most prolific and successful producers in American television history. He was born in Virginia in 1956, and attended the Carnegie Mellon School of Drama in Pittsburgh. Carnegie Mellon University would later name a video production soundstage in his honour.

He began his career producing the movie Nice Girls Don’t Explode in 1987. The following year he made his professional writing debut on an episode of CBS Playhouse, “Roughhouse”. In 1988 Wells was hired as a producer for the ABC drama China Beach. The series, created by John Sacret Young and William Broyles Jr., centred on a group of doctors and combat medics during the Vietnam War.

China Beach was a critical success, but not a commercial one. ABC continued to support the series for four years in total before shutting the production down. By the end of the series in 1991, Wells had graduated to the position of co-executive producer, and had written 18 out of the series’ 62 total episodes. Wells wrote and produced several made-for-TV films, including Angel Street and The Nightman. He also wrote Entertaining Angels: The Dorothy Day Story – a film which featured Moira Kelly, later to appear in The West Wing’s first season.

In 1994, and based on his widely praised work on China Beach, Wells was invited by Amblin Entertainment and Warner Bros Television to produce their new medical drama ER. That series, on which Steven Spielberg initially served as executive producer, was an adaptation of a 20 year-old Michael Crichton screenplay. Crichton, a former doctor, had written the film depicting a 24 hour period in the life of an urban emergency ward. It was redeveloped first as a feature film for Spielberg to direct, then – when Spielberg became more enamoured with Crichton’s new novel Jurassic Park – as a weekly television series.

Taking responsibility for the series following its pilot, Wells went about re-hiring several key members of the China Beach crew, including writer Lydia Woodward and director Mimi Leder. ER became the breakout hit of its season, regularly gaining 19 million viewers in the USA and ranking as the second-most popular television series of the year after Seinfeld. By its second season, ER was number #1. The fourth season finale, “A Hole in the Heart”, reached an all-time peak of 47.8 million viewers (due largely to a lead-in from the Seinfeld series finale in the preceding hour).

With the runaway success of ER, Warner Bros started pushing Wells to develop and produce a new TV drama. It was while developing ideas for a new series that Wells arranged with Aaron Sorkin’s agent to meet with the writer over lunch. The night before Sorkin’s scheduled lunch meeting with John Wells, the writer hosted a dinner party at his own home. Among the friends attending the party were actors (and couple) Bradley Whitford and Jane Kaczmarek, and screenwriter/producer Akiva Goldsman. Goldsman had established his writing career working for director Joel Schumacher – already the pair had collaborated on the John Grisham thrillers The Client and A Time to Kill, as well as two Batman films – Batman Forever and Batman & Robin. He had recently started producing as well, acting as both writer and producer on the New Line Pictures remake of Lost in Space.

Sorkin explained to Goldsman about his meeting the next day with John Wells. ‘At some point,’ said Sorkin, ‘Akiva and I wander into a little office I had, and the poster for The American President was up on the wall. And he said, “You know what would make an interesting TV series? That. Forget about the romance between the President and the lobbyist, and just sort of write it about the senior staffers”.’(2)

Sorkin appreciated the suggestion, but reminded Goldsman he was only going to the meeting to meet John Wells, and had no intention of developing anything for television. When Sorkin arrived at the restaurant for lunch, he was surprised to find John Wells joined by three representatives of the CAA talent agencies and a number of executives from Warner Bros Television. ‘Rather than say, “Um, you know, I think there has been a misunderstanding” and say I didn’t have any ideas to pitch, I said “I want to do a TV show about senior staffers at the White House”.’(3)

Sorkin’s impromptu presentation comprised a mixture of elements deleted from his original 385-page screenplay to The American President, as well as other random ideas off the top of his head. The presentation excited Wells immensely, although the Warner Bros executives were another matter. Wells had already been developing a sister series to ER with Edward Allen Bernero, titled Third Watch. Warner Bros was keen on the new series, which followed police officers, paramedics and fire-fighters in New York City. The studio executives were unconvinced that a series about Presidential politics would find as easy an audience. In the end, Wells was so committed to The West Wing that he made it a condition of his contract with the studio: no West Wing, then no Third Watch either. Ultimately Warner Bros agreed to produce both series (Third Watch ran for six seasons from 1999 to 2005), and rapidly signed a deal for broadcast rights with ER broadcaster NBC.