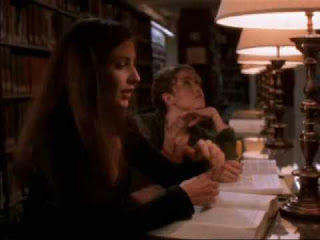 In “Lies, Damn Lies and Statistics”, the Bartlet administration get the first taste of how the public will respond to their new “Let Bartlet be Bartlet” policy while the President and Leo continue their efforts to kick-start finance reform. Laurie finally graduates from law school, leading to a crisis for Sam when a British tabloid photographs him with her. Meanwhile C.J. faces up to her own personal crisis in confidence. The episode’s title comes from a Benjamin Disraeli quote: ‘There are three kinds of lies: lies, damned lies, and statistics.’

This is a strong episode for C.J., who has undergone the most pronounced character development of any of the regular cast so far. We started the series with her a little under-confident and overwhelmed, and we recently saw her finally stand up to the President over the media’s coverage of his daughter. Here she admits that she feels she let her workmates down over Mandy’s leaked strategy memo, and worries that Leo is marginalising her as a result. By the episode’s end she seems to have recovered her confidence – and her expectations for the President’s new opinion poll, already much higher than anyone else’s, are satisfied.


The Sam-Laurie storyline that has run throughout the season also reaches an end. Laurie’s graduation is marred by a tabloid photographer snapping her and Sam in a romantic embrace. We learn that the Daily Mirror will be printing the photographs the following morning – and that the press will have the story the day after that, but the specific effects of the media coverage are never revealed. What we do know is that Laurie has the President’s support, that Sam is in no danger of losing his job, and that the Republican leadership no longer has the threat of revealing Sam and Laurie’s friendship to hold over the White House.

It is one of the strengths of The West Wing as a series that Aaron Sorkin realises that in many cases there is no need to see a storyline through from climax to denoument – if we can see the horizon clearly enough by episode’s end, there is no need to actually visit it in detail. Laurie has finished law school, and with the President’s support will become a lawyer, and Sam will survive the scandal with little negative effect on his career and professional standing. To dwell on the storyline any further would be unnecessary.

That said, there is something that is ultimately unsatisfying about the Sam/Laurie story arc. Too often throughout the season it has seemed a little unfocused, and lacking in a strong drive. It has always been complicated from time to time by seemingly wrestling with Sam’s other romantic storyline with Mallory O’Brien. Had Sorkin picked one plot thread out of the two and stuck to it exclusively, Sam Seaborn (and Rob Lowe with him) would have been served a lot better.

The musical chairs storyline, in which another seat is opened on the FEC by offering its occupant an ambassadorial appointment, was inspired by a real-life news story about a vacancy for the post of United States Ambassador to the .

The storyline was remarkably close to what happens in real-world politics. Marlin Fitzwater noted to Jim Lehrer that ‘where they fired an ambassador to make room for somebody else they wanted to move into that slot so they could hire somebody else in a third position, that happens often. I’ve been a part of those kinds of things myself, but it never happens in the White House. The President never does the dirty work himself, and the public never hears about it. But the show was able to dramatise that.’(1)

Lawrence Pressman plays Ken Cochran, the ill-fated Ambassador to Bulgaria. Born in 1939, Pressman is best known for roles in Doogie Howser M.D., Ladies Man and Profiler. In 1977 he starred in the NBC comedy/drama Mulligan’s Stew.

Thom Gossom Jr. plays Ted Mitchell, the friend Bartlet asks to employ the now former Ambassador Cochran. Gossom had previously starred as Ted Marcus on the TV series In the Heat of the Night and as Ben Washington in the popular TV movie Miss Evers’ Boys, as well as appeared in NYPD Blue, Becker, Providence, Chicago Hope and ER. In 1999 he played Detective Sterns in the David Fincher film Fight Club.

This storyline provides Martin Sheen with a rich seam of comedic material, which he exploits marvellously. It even crosses over into more serious moments, such as his arguing with Charlie over whether Charlie has crossed paths with Ken Cochran before. In truth, Charlies has: he worked at a whites-only club which included Cochran as a member. It’s a serious addition to the episode, and echoes Charlie’s earlier encounter with Peyton Harrison in “The Short List”. Bartlet’s comedic reaction to Charlie and Cochran’s past is a contrast to the gravity of what kind of person Cochran has turned out to be.

Briefly appearing as a friend of Laurie’s is Reiko Aylesworth, who later co-starred in several seasons of 24 as CTU operative Michelle Dessler. Aylesworth’s other roles following this episode have included starring in Alien vs Predator: Requiem, a seven-episode stint on ER as a hospital chaplain, and multi-episode arcs on All Souls and Law & Order: SVU.

Don Chastain makes the first of two appearances here as an unnamed member of the press corps. He returns in “The Portland Trip” in Season 2.

The episode was directed by Don Scardino, who directed Aaron Sorkin’s A Few Good Men on Broadway. Scardino’s television work included episodes of West, Homicide: Life on the Street, Sports Night, Cosby, Law & Order, Rescue Me and 30 Rock (on which he also served for a period as a producer).

“Lies, Damned Lies and Statistics” is the triumphant conclusion of a late-season trilogy, which began with “Let Bartlet Be Bartlet” and continued in “Mandatory Minimums”. It is also very close to a wrap-up for the entire season. By the conclusion of the episode, almost all of the running plot threads of the first season have been resolved, and the decks have been cleared for the one remaining storyline – Charlie and Zoey’s romance, and the threats Zoey has been receiving from white supremacists as a result.