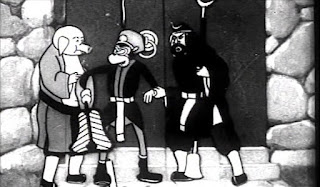 Princess Iron Fan is a Chinese animated film, produced and released in 1941. That makes it the oldest animated feature in the history of Chinese cinema. It was the 12th animated feature film produced anywhere in the world, animated by a team of 237 artists in war-time Shanghai under near-impossible working conditions.

The film was directed by the Wan brothers, Guchan and Laiming, who had been creating animated shorts in China since 1926. Seeing Walt Disney's Snow White and the Seven Dwarfs in 1939 inspired the Wans to create their own animated film with a specifically Chinese flavour. To this end they selected a brief section of Journey to the West and adapted it to the screen. The monk Xuanzang (or Tripitaka) is forced to pause his journey when the path ahead is blocked by magical fires. To remove the flames he requires a magical fan owned by the Princess Iron Fan, and to this end he dispatches the Monkey King to ask to borrow it for a short while. Hijinks, as they say, ensue.

The influence of Walt Disney is very obvious in this film. It's there in the movement of the characters and the style of the humour, although interestingly it's not entirely there in terms of visual design. While some characters appear to have been pulled straight from the standard Disney aesthetic, others have a distinctive look of their own. The combination makes the film unique in appearance; a precise blend of American and Chinese styles.

Despite the directors drawing inspiration from Snow White, the character movements and gags are much closer to the black and white Silly Symphonies of the 1930s than the more serious, considered style of Disney's features. This film is also entirely in black and white, which does give it a bit of a sense of being older than it actually is.

Much of the character movement has clearly been rotoscoped from live-action, which does create some odd contrasts. In some close-ups the eyes of the actual actors have been retained, with the faces animated over. It's all rather disturbing to watch.

By 21st century standards the film drags, but in a considered historical context it's rather delightful. There's a lot of cheerful slapstick to be found in the Monkey King's antics, and viewers already familiar with Journey to the West via the Japanese series Monkey or any number of live-action Chinese and Japanese language films will likely smile in recognition at some of the film's key sequences.

In 1942 Princess Iron Fan was exported to Japan, where a 16 year-old Osamu Tezuka saw it. Later in life he would specifically cite Princess Iron Fan as one of the key works that inspired him to become a manga artist. To an extent, therefore, the film may be seen as a key inspiration for the Japanese manga and anime industries in general. Anime enthusiasts should enjoy seeing a key piece of the puzzle revealed, whereas animation fans in general should appreciate the artistry and effort involved in bringing the Monkey King's adventures to the screen.
Posted by Grant at 7:54 PM