The West Wing: "The State Dinner" 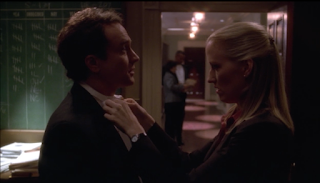 In “The State Dinner”: the FBI has a survivalist compound under siege, a Class-4 hurricane is bearing down on a naval carrier group, a national trucker’s union is threatening to go on strike, and the President and First Lady must host the titular state dinner with the President of Indonesia.

“The State Dinner” is an episode about failure. We watch over 42 minutes as the President fails, Toby fails, Mandy fails and Sam fails. For this viewer it is ultimately a story about powerlessness. The President begins the episode as the most powerful man in the developed world. He ends it helpless, sitting by a telephone talking to a young man with minutes to live.

The episode is the first to feature the First Lady, Dr Abigail “Abbey” Bartlet M.D. The character was mentioned in the pilot, but did not appear until now. The role is performed by Stockard Channing.

Stockard Channing was born Susan Antonia Williams Stockard in New York, 1944. Her stage name is a combination of her birth surname, and the surname of her first husband, Walter Channing, whom she married in 1963 (they divorced four years later). After working with the Theatre Company of Boston and in the Broadway musical The Two Gentlemen of Verona, Channing made her television debut on Sesame Street. After a number of small parts, Channing shot to fame first as Warren Beatty and Jack Nicholson’s co-star in The Fortune (1975) and then as high school rebel Betty Rizzo in Grease (1978) – Channing was 33 years old at the time. Subsequent roles included starring in the short-lived sitcoms Stockard Channing in Just Friends (1979) and The Stockard Channing Show (1980), the long-running Broadway show They’re Playing Our Song (1980-81), the play A Day in the Death of Joe Egg (1985) – which earned her a Tony Award, two Tony-nominated performances in The House of Blue Leaves (1986) and Six Degrees of Separation (1990), an Emmy-nominated performance in the miniseries Echoes in the Darkness (1987) and an Oscar and Golden Globe-nominated performance in Fred Schepisi’s film adaptation of Six Degrees (1993).

Channing was cast in the role of Abbey Bartlet with very short notice. She was sent an incomplete copy of the episode’s script, and on the basis of what she read spontaneously agreed to make an appearance. She was flown to Los Angeles during a break in a motion picture shoot, fitted for an evening gown and rushed to the set. When Channing arrived to shoot her scenes, she had not even met Martin Sheen – with whom she would be acting. Channing said: ‘After we’d finished the take, I said to The West Wing’s then-writer, Aaron Sorkin, “You’ve got to tell me who Abbey is”. He said, “I can’t tell you that”. I said, “Then, why am I here?” He said, “Talent.” I said, “We have no time for flattery.” I think my spiky distress during that first exchange informed who Abbey Bartlet became.’(1)

Abbey Bartlet is introduced the audience in a gradual fashion: we see her in conversation with C.J., then with Leo, then Sam, and finally with her husband Jed. Much like the pilot, in which Aaron Sorkin waits almost the entire episode to introduce the President, “The State Dinner” sees Abbey and Jed Bartlet sharing a scene for the first time 37 minutes into a 42 minute episode.

Stockard Channing gives a marvellous performance, made even more impressive when you know of how spontaneously she must have pulled it all together. Abbey is completely believable as a woman who would not only marry Jed Bartlet but challenge him on an intellectual level as well. Future episodes develop the character’s trademark spikiness, but here she’s a much lighter, innately likeable person.

Channing’s casting had been so hasty that no one had sounded her out about appearing in the series on a semi-regular basis. Shortly after “The State Dinner” was broadcast, Aaron Sorkin invited her out to lunch, and told her (in Channing’s words): ‘Well, everybody thought that was great. And also our ratings went up a lot when you went on, which may have had something to do with it. ’(2) The character made sporadic appearances throughout the first two seasons before officially joining the main cast from Season 3 (unlike the other lead actors, however, Channing would only be credited on-screen in episodes she appeared in. This was a practice picked up for the rest of the lead cast in Season 7.)

Some years later, while performing a play in New York, Stockard Channing was approached after the show by five elderly women. They commended her for her performance in the play, commented on her role as Abigail Bartlet – and remarked how happy they were that ‘Rizzo turned out all right’.

Over and above the four interwoven storylines of “The State Dinner” there is the rising tension of a hurricane approaching the United States coast. We get updates throughout the episode, and as the minutes tick over we can see and hear the weather outside deteriorating into a storm. Charlie is concerned his grandparents are in danger, which keeps the hurricane subplot fresh in our minds – and gives it a personal stake as well. By the episode’s climax, the hurricane turns straight back out to sea and directly towards a naval carrier group that sailed out of harbour specifically to avoid the storm.

The hurricane is a clever backdrop: the weather darkens as the various storylines do. It’s so successful a backdrop in fact that Sorkin repeats the trick a year later in “Two Cathedrals”. One storyline sees Toby simultaneously forcing a rewrite of the President’s toast, transforming Sam’s warm-hearted tribute into a pointed criticism of Indonesia’s human rights record, and attempting to put together a meeting with the Indonesian President’s deputy to have a wrongfully imprisoned friend released from prison. The episode gains some much needed levity as communication problems see Donna finding a translator to allow Toby to speak to the Deputy, and then a second translator so that the first translator (who doesn’t speak English) can speak to Toby.

While the scenes are amusing as they play out, they’re sadly based on a false premise. Minaldi claims there is no such language as Indonesian, but this isn't the case. The state language, Bahasa Indonesia, is spoken by the majority of the population – and certainly by all employees of the national government.

The storyline ends with the Deputy – Rahmadi – telling Toby to ‘go to hell’. Toby has insulted Indonesia on the other hand, and then begged it a favour on the other. His own arrogance has proven his downfall and, as Rahmadi storms off, it’s clear from his face that Toby knows it. Ariono Surianiwata plays the stoic Indonesian President – it remains his only credited performance of film and television.

Sam’s conflicted friendship and romance with Laurie takes another hit when she unexpectedly turns up at the state dinner, the guest of party donor Carl Everett. The episode received criticism from those working in the real White House for its lack of realism. In truth every guest at a Presidential function is extensively vetted and scrutinised prior to their arrival, making it extremely unlikely that a paid escort would pass the Secret Service’s extensive security checks. That said, Laurie’s presence is not completely impossible. The gatecrashing of an actual White House function in 2009 by aspiring celebrities Tareq and Michaele Salahi has proven that.

Sam’s growing obsession with Laurie hits a new low when he spontaneously offers her $10,000 not to leave with Everett at the end of the night. Laurie doesn’t even have words, and leaves Sam in silence. Sam – like Toby – is left in a failure of his own making.

The third personal failure of the episode belongs to Mandy. After forcing her way into a discussion with the FBI over how to resolve an armed siege of rural survivalists, she recommends that the FBI send in a crisis negotiator. The President takes up her advice, and by the siege’s end it is the negotiator who is the only casualty: shot by the survivalists and in a critical condition. The subplot ends with Mandy fleeing the dinner in a state of shock: her own advice has almost cost another person’s life.

It is interesting to note throughout this episode that the dynamic between Josh and Mandy has changed. Efforts to keep the spark of a ‘will they/won’t they’ romantic story arc alive have apparently died completely, and she simply comes across as another member of the White House staff. At the same time, Josh’s flirtatious banter with Donna seems to be kicking into overdrive – the series is gradually evolving.

Leo attempts to settle a looming teamsters union strike that will cripple the nation’s transport industry. That storyline ends with Bartlet storming into the room, interrupting the explanations on both sides and then announcing both parties must resolve the issue within minutes or he will nationalise the trucking industry. He uses Truman’s nationalising the steel industry as precedent, and that is actually true: in 1952 Truman nationalised the steel mills to avert a strike. The seizure was ruled unconstitutional by the Supreme Court in the Youngstown Sheet & Tube Co. vs. Sawyer case. The strike negotiations are a minor subplot: they exist simply to allow Bartlet some small victory in the episode. As Abbey notes, he resolves the strike because he ‘can’t save a gunshot victim and he can’t stop a hurricane’.

The episode ends with Bartlet speaking over the radio to a crewman on the tender ship USS Hickory. The hurricane has hit the fleet, and the ship is taking on water. The President is essentially helpless. We fade to black with Bartlet doing the only thing he can: talking to the young man and telling him – fruitlessly – that everything is going to be all right. In “Two Cathedrals” it is finally confirmed that the Hickory was sunk in the storm, presumably with all hands lost.

A small casting note: Colin Gray makes the first of three appearances in the White House press gallery as ‘Bruce’ (credited only as ‘Reporter’ for his first two episodes). He returns in “Enemies” and “Lord John Marbury”. These were Gray’s final on-screen performances. He had previously played Frank Hardy in the short-lived 1995 TV adaptation of The Hardy Boys. Gray has subsequently become a documentary writer, director and producer, working on such films as Freedom’s Fury (2006) and Redlight (2009).

This episode was submitted for Emmy consideration, along with “He Shall, From Time to Time...” for Stockard Channing. It earned her a nomination for Outstanding Supporting Actress. The episode was also nominated for Outstanding Costumes for a Series.