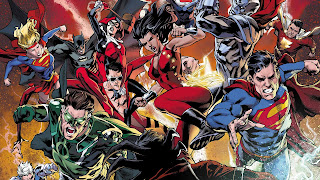 May 2015 saw DC Comics continue with its two-month Convergence event. I think it was always assumed sales for the month would be down from April. The question really is: by how much?

For now let's ignore the holdovers from March that got published in April: new issues of Justice League, Batman and Superman that got released late and helped boost DC's overall sales. Let's also put aside the weekly Convergence series as well - we'll get to that in a moment. That leaves us with the 40 two-issue miniseries published: how much did the sales drop between issues one and two?

Fourteen per cent. That's actually fairly impressive when you consider that the average second issue drop for DC Comics is about 24 per cent. The average units per issue were just shy of 36,000, compared to almost 42,000 in April. Jump back a year, and May 2014 average units per comic were just under 28,000. All up that suggests that Convergence was pretty successful. The next question for DC is how much momentum was lost by suspending the regular books for two months. 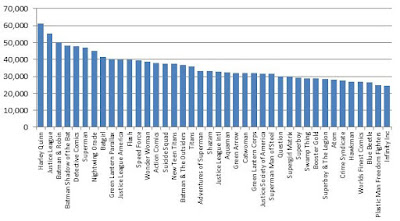 That fourteen per cent drop wasn't consistent across all 40 books of course. Convergence: Speed Force only dropped by 7.8%, and Convergence: Superman by 9.5%. Down at the other end of the spectrum Hawkman, Crime Syndicate, Justice Society of America and Infinity Inc all recorded drops of more than 18%. Everything else sat in between.

So much for the tie-ins. What about the main Convergence miniseries? 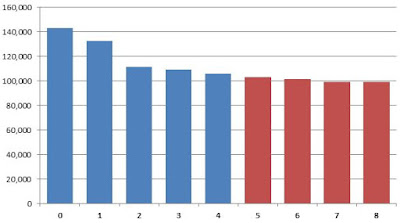 It was a weekly series, so in the chart above issues #0-4 were from April, while issues #5-8 were from May. As you can see, after the initial burst of interest for the first two issues, sales settled down quite comfortably. Between issue #2 and issue #8, sales dropped by just 11 per cent. Average units shipped across all nine issues were just under 112,000. That's almost 5 per cent above Forever Evil, DC's last high profile miniseries, which averaged 107,000 units across its seven issues.

Now I wasn't personally that invested in Convergence. In fact, out of 40 two-parters and a weekly miniseries, I bought Hawkman. I'm very keen to see how DC go in June, with the mini-relaunch and a smattering of new titles. I'm also keen to see what the drops are in their ongoing series: did a two month break give many readers an excuse to bow out and move on?
Posted by Grant at 1:05 PM