Ga-Rei-Zero: "The Cause of the Duty" 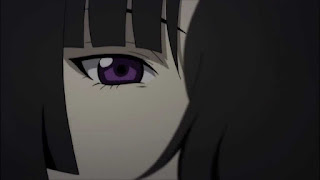 Kagura continues to accompany the SDCD team on ghost-hunting missions, and makes her debut as a proper member of the team. She and Yomi continue to bond and grow closer, but a last-minute encounter with her father shows Kagura that she still has much to learn about fighting the supernatural.

An unexpected amount of blunt comedy combined with extensive fan service help to give Ga-Rei-Zero's yet another change in tone. This marks the third major shift in just four episodes, making this a maddeningly difficult series to pin down. The change is, in this case, not an improvement. Whereas the first two episodes were confusing as all hell, this episode is just pretty bad television.

To be honest it's the fan service that irritates the most. It's a perennial hazard of watching Japanese animation; so much of the medium is aimed primarily at teenage boys and young men, and many otherwise great series have been marred by deliberate shots of teenage girls' underwear, or partial nudity, or sexualised situations of one form or another. To an extent it's something I overlook thanks to the positive merits elsewhere in a show, but in cases like this it's difficult to do that. I don't really have a confident idea of what this series is trying to be, which makes the egregious nudity and faux lesbianism pretty much impossible to tolerate.

What's worse, this episode randomly throws in a pile of poorly judged humour. In the main this centres around Michael, a white-haired muscular man who shrieks and yells while running around almost completely naked. He creates the mystical weapons used by the SDCD, but is a remarkably irritating character to watch.

The animation in this episode also seemed rather poor. It was not particularly strong in the series' first episode, but by episode 3 it seemed to have settled down to a fairly watchable standard. For whatever reason this episode felt very off its game, visually speaking.

In other respects this is finally starting to feel like an actual anime series. We've got opening and closing titles for the first time, and a theme song, and the characters from last episode actually follow on logically here and in an understandable fashion. I just wish this was feeling like a good anime series. As it stands the quality ratio's now down to 25 per cent, or one good episode out of four. I'm intrigued, though, and in the worst possible way: I'm now hooked on seeing just how weirdly uneven this series will be.
Posted by Grant at 11:01 PM