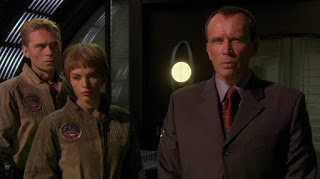 The Enterprise has returned to Earth as a group of allied civilizations begin negotiations for a trade alliance among them - the first step towards a broader coalition in the future. A dying woman sends T'Pol and Trip on an unexpected mission: somehow, somewhere on Earth, they have a child.

It's genuinely a surprise, after pointless Klingon continuity references, half-naked slave girls, and parallel universe shenanigans, to find Enterprise producing a decent episode again. "Demons" is great: it has an intriguing storyline, a fast pace, and it tells precisely the sort of story that Enterprise was set up to tell: not weird combinations of continuity minutia but actually Star Trek history. The negotiations going on in the background of this episode will lead, ultimately, to the United Federation of Planets.

The truth behind Trip and T'Pol's infant child is rather disturbing. Somebody on the Enterprise stole their genetic material from the medical bay, and passed it on to a radical anti-alien movement named Terra Prime. They have subsequently used that material to clone themselves a half-human half-Vulcan baby, which they plan to parade on the world's media to scare people about integrating with aliens. That's really horrifying: stealing people's genes without consent, breeding them a baby without their knowledge, and all for the sole purpose of presenting that baby as a monster.

Peter Weller gives an understated but powerful performance as John Paxton, the CEO of a moon-based mining facility and the leader of the Terra Prime movement. He's a bigot and a monster, but he's a bigot who honestly believes he's doing the right thing. It's a strong portrayal of racism and the dangers of extreme right-wing rhetoric that resonates all too well today. Star Trek was founded on these kinds of social commentaries and allegories, and it's so nice to see Enterprise picking up a long tradition and running with it.

This is also an episode that does continuity references correctly. There actually is an original series reference in this episode (a man named Colonel Green) but it's fleeting and peripheral enough that it can please the hard-core without alienating the casual viewer. There are also nice callbacks to earlier episodes of Enterprise: we've already seen the anti-alien movement on the rise, and Reed uses his Section 31 contact Harris to get information to help Trip and T'Pol's search.

Connor Trineer and Jolene Blalock both deliver great performances here, with great material to drive it on. Their mutual reactions of shock, confusion, anger and grief really sell what could easily be a very silly storyline.

This one gets an enthusiastic thumbs-up, bringing the overall season tally to nine good episodes out of 20. The quality ratio rises a little too 45 per cent. It's been a disappointing final season, but thankfully there have still been a few diamonds in the rough.
Posted by Grant at 7:33 AM