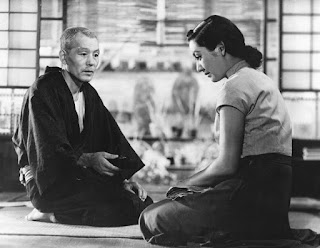 An elderly couple, Shukichi and Tomi Hirayama (Chishu Ryu and Chieko Higashiyama), take the train up to Tokyo to stay with their adult children. To their busy children they are a mild irritant, and they do their best to fob them off upon one another before paying for them to stay at a relaxation spa out of town instead. The only member of the family to offer them much attention or hospitality at all is Noriko (Setsuko Hara), the widow of their son who was killed during the war.

Yasujiro Ozu's Tokyo Story came to this year's Melbourne International Film Festival as a beautifully remastered print and as part of a special retrospective on legendary Japanese actress Setsuko Hara. I had already watched one film in the series (Kimisaburo Yoshimura's A Ball at the Anjo House, reviewed here) but the opportunity to watch Japan's most widely acclaimed feature film on the big screen was too good to miss.

In many ways Tokyo Story is a near-impossible film to review. It has always been considered one of the best - arguably the best - Japanese feature films ever produced. At the last Sight & Sound critics survey it supplanted long-running winner Citizen Kane as the single-greatest feature film worldwide. How do you tackle a film that widely revered? A few months ago I reviewed Ozu's penultimate film The End of Summer, and a lot of the thoughts I expressed in that review apply equally here.

One of the things that makes Ozu such a remarkable director is the near-unique manner in which he shoots his films. The great Japanese directors of the 1940s and 1950s each had their own particular style: Mizoguchi had his long static takes, Kurosawa had his aggressive American-style rhythms, and Ozu had his slightly unsettling geometric placings. His angles were always straight-on, with conversations often consisting of two characters talking directly to camera in turn. His camera was always placed just a few feet off the floor, and often at right angles to his backgrounds. The 180 degree rule, drilled into generations of filmmaking students around the world, is something he freely ignored. In short, Ozu developed his own highly formal style of directing and stuck to it. It is not precisely the visual language that was used by everyone else, but it certainly worked brilliantly for him.

That style, combined with his perennial focus on changing Japanese families - parents from one generation struggling to connect with their children in the next, helped to make Ozu immediately recognisable. You can effectively see any given scene of the majority of his works and recognise the director without having seen the film before. They are all great films, although Tokyo Story certainly is one of the best. It is a gentle work, filled with warmth and nicely observed human behaviours. Ozu made films about everyday people and everyday concerns, and it takes a rare talent for a film about ordinary subjects to seem brightly extraordinary to an audience of viewers.

As always Ozu draws wonderful performances from his cast. Chishu Ryu and Chieko Higashiyama are wonderful as the elderly, ever-patient parents. There is a lightness of touch, both in their own private interactions and their conversations with their children. It is representative of the film as a whole. None of the children really want their parents there, but no one is prepared to say it. No one makes a fuss or a scene. It all just gently rubs the wrong way for everybody. It sounds like the film might suffer a lack of drama, but what it really gains is a sense of identification. Most people have had an experience of having a family member arrive at a frustrating or particularly busy time. You do not have to be Japanese to feel Tokyo Story reflecting at least parts of your own life.

Haruko Sugimura is wonderfully funny and biting as Shige, the impatient and constantly irritated daughter who is much too busy with her beauty salon to tolerate her parents' presence. One scene, in which an embarrassed policeman drops off her drunken father and two of his friends after a night on the town, is comic gold.

Setsuko Hara shines in her role as devoted daughter-in-law Norika. It is a role Ozu purposefully built for her: warm, honest, earnest, and hopeful. She played variations of this character throughout her career, but she always played it so incredibly well. It is through roles such as this that she became such a notable screen icon.

The tone of the film changes so effortlessly when tragedy strikes, and the gentle, fond humour transitions into melancholy. It is a tone that seems to suit Ozu particularly well: his formal structure and carefully presented dialogue allows so much space for depth. So much of his characters think seems to be left unspoken. He is Japan's most highly regarded film director, and it turns out there is a pretty good reason for that. The best film ever made? I honestly think that is an impossible judgement to make, but one of the best? That, to me, seems certain.
Posted by Grant at 10:17 AM