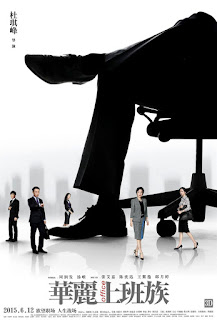 The massive Hong Kong corporation Jones & Sunn is about go public. CEO Winnie Cheung (Sylvia Chang) is set to become a major shareholder after being a mistress to Chairman Ho Chung-Ping (Chow Yun-Fat) for twenty years. At the same time Winnie has been secretly romancing one of her executives, David Wong (Eason Chan) - and he has been secretly stealing company funds to play the stock market. New recruit Lee (Wang Ziyi) arrives eager to impress, and immediately falls for fellow new employee Kat (Lang Yueting), not knowing that she is actually the Chairman's daughter. This tale of corporate intrigue and romance plays out on a stylised set the size of an aircraft hangar, is shot in 3D, and is a musical. That certainly makes it one of the stranger Hong Kong film productions of recent years.

The film is directed by Johnnie To, my personal favourite filmmaker, and of course that means I arrived at the cinema with extremely high expectations. That may have been a mistake: it is a disappointing film compared to To's best, but it admittedly still a well-staged and often inventive musical - and how many musical films do you see coming out of Hong Kong anyway?

Sadly, and despite the best of intentions, Office does not quite manage to work. I suspect a big problem is that To did not develop the material himself. He has a particular style and cadence to his films, which come from a loose, improvisational style that often sees him shooting a film as he writes it. With Office he is simply adapting a pre-existing stage play, Design for Living by Sylvia Chang - who also co-stars. To an extent that robs him of the spontaneity that makes the rest of his films work so well. Not that the film is a write-off: instead it is that rare case of a director being great so many times that when his latest film is merely very good it feels like a disappointment.

A musical tends to ride and fall on the back of its songs, and those in Office are not particularly interesting. There are occasionally very funny, and certainly they are staged rather well, but none of them linger in the memory. The melodies don't hang around in the mind afterwards, and that is pretty much a kiss of death as far as musicals are concerned.

The staging is much more interesting, with all scenes played out on a massive stylised set. There are no walls of which to speak, just frameworks of rooms and buildings. It gives the film a nice sense of unreality, and enables it to feel an awful lot like a stage musical rather than a movie. It is all presented in 3D as well, which is effectively and unobtrusively done but at the same time does not really add anything of great value to the proceedings. I am very much on the record as disliking 3D cinema in general, and certainly nothing To does here has changed my mind.

The film reunites To with not only Sylvia Chang but also Chow Yun-Fat, the stars of his first major directorial hit All About Ah-Long (1989). They both give strong, charismatic performances. Of the two Chang does the superior job, mainly because her role is much larger. Chow is left to look suave and dignified within his key scenes, and sadly never gets to sing. Among the supporting cast Eason Chan and Tang Wei are the stand-outs: Eason playing an over-confident executive who suffers big trouble when the GFC hits, and Tang playing a lovestruck office worker who gets dragged into his attempts to recover his losses.

The film is fun enough, but it fails to make a long-term impression. It seems less of a film really and more of a novelty piece: who doesn't want to say they just watched a Chinese language musical about the global financial crisis?
Posted by Grant at 5:09 PM