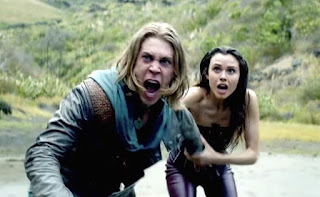 It is 5 January 2016, and time for The Shannara Chronicles.

When I was a child I was relatively obsessed with epic fantasy fiction. I had read The Hobbit, but found The Lord of the Rings too slow and full of interminable descriptions of mountain ranges and Middle Earth pre-history. I read a lot of the popular series of the time, enjoying some more than others, but the books I really embraced and grew to adore were Terry Brooks' Shannara novels. At the time there were three: The Sword of Shannara, which was a brazen Lord of the Rings remake styled for short-attention-span readers like myself, its sequel The Elfstones of Shannara, and the third volume The Wishsong of Shannara. I always wished that someone would adapt the novels into a movie or TV series. Now, decades later, Elfstones has received a screen adaptation in the shape of MTV's television drama The Shannara Chronicles. Ten year-old me would be tremendously excited. Forty year-old me is a little more cautious. MTV making a fantasy drama? What on Earth would that be like?

It turns out that when MTV makes an epic fantasy series, you get pretty much exactly what one would expect an MTV-produced epic fantasy series to be like. The main cast are all young and impossibly pretty, and all gush at one another like teenagers preparing for the senior year prom. The visuals are eye-catching and lushly presented. The tone is very simple and comparatively breezy: basically a family-friendly alternative to Game of Thrones with less sex, violence and depth. To be honest it all feels rather mid-1990s.

This first episode follows three young protagonist. Farmboy Wil Ohmsford (Austin Butler) sets off to seek his fortune after the death of his mother, armed with three magical Elfstones of unknown power. Meanwhile privileged elven princess Amberle (Poppy Drayton) fless her kingdom when she begins to receive apocalyptic visions from a magical tree. Finally the thief Eretria (Ivana Baquero) weaves a path via both characters at different times, failing to rob Amberle but stealing the Elfstones from Wil.

The series adapts the second Shannara novel rather than the first: this seems wise, given an accurate adaptation of The Sword of Shannara would likely result in an immediate legal action by the Tolkien estate. It also has the unexpected benefit of adding back story. Already in this 90-minute series premiere there is talk of "the war of the race", a dreadful conflict a generation ago that nearly destroyed the world. It helps to give the series depth. Another element that helps give the series' fantasy world some depth and history is the fact that it is clearly our world after some dreadful magical cataclysm. This was a late retro-active change to the series by Terry Brooks, who has continued to write Shannara novels over the last forty years. It works really well here. It helps to make the series feel just a little bit original around the edges.

That is fortunate, as there is precious little originality anywhere else. This is a stereotypical world of elven kingdoms in forests, evil since the dawn of time, plucky young farmboys with secret destinies and runaway princesses. The dialogue is exactly what you might expect: not exactly risible, but certainly very simplistic and predictable. This is essentially comfort food television. It rattles along at a fair pace, broadly entertains its target audience and does not waste time on originality or depth. The cast are either playing the scenes like an episode of One Tree Hill or lending over-the-top gravitas (Manu Bennett is a prime offender in this latter case, playing the druid Allanon - basically Gandalf - with a mixture of glares and deep-throated grumbles).

To its credit the episode does a nice line in visual spectacle: certainly a lot of money has been spent creating its post-apocalyptic world and the various magical elements and demonic villains. Is it ultimately any good? That honestly depends upon what you want. If Game of Thrones is too bleakly violent and morally complex, but you are craving some bright uncomplicated fantasy television, this really could be right up your alley. For what it is worth, I rather enjoyed it.
Posted by Grant at 8:50 PM