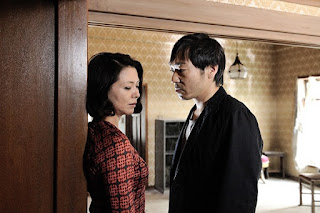 It is 5 February 2012 and time for the final episode of Penance.

15 years ago Asako's daughter was assaulted and murdered her school gymnasium by a mysterious stranger. The murderer was never found by the police, and Asako was so incensed with her daughter's four friends - who could not describe the man - that she demanded they all pay penances for their failure. Now the fourth of those girls - now women - has given Asako the name and address of the man that killed her daughter, and offered her the long-awaiting chance for revenge.

Kiyoshi Kurosawa's five-part miniseries Penance saves the best for last with this crushing and masterfully claustrophobic finale. Each of the first four episodes showcased one of the four girls, and showed how the effects of Emili's murder effectively ruined their lives. Now it is Asako's own turn to see how badly her life has been destroyed, and the causes stretch way beyond her daughter's death and all but lay the blame for everything at her feet. This is not happy television.

The episode is a perfect showcase for Kyoko Koizumi, who captures all of Asako's complexity, hesitation and self-doubt. Earlier episodes suggested she was a confident, vengeful figure. Now that her goal is in sight she is suddenly uncertain and prone to panic. When she travels to the school where she has been told the murderer works, she finds an ex-boyfriend from university. The episode does not even bother with suspense: it is clear from the outset that this man, named Aoki, murdered Emili. It does not need to keep the question in the air, as there is much more fertile ground for drama in the 'why' of the murder.

It turns out Asako's own actions as a university student initiated the entire chain of events: caught in a love triangle with Aoki another female student, she watched as that student become more and more depressed until she was driven to suicide - and then Asako stood by and did nothing as she killed herself. Years later Aoki discovered - by what has to be noted as a near episode-breaking coincidence - that Asako had kept and hidden a suicide note, and goes out for revenge against her.

To be honest the plot is almost inconsequential; what it achieves is giving "Atonement" a tremendously confined and disturbing atmosphere. There is no justification for murder, obviously, but there is enough here for Asako to feel that everything is ultimately her fault. The scenes between her and Aoki are deeply unsettling, as are those between Asako and the police officers whose investigation has reached the same conclusion over Aoki's guilt that Asako has. Everyone knows Asako is planning his murder, but the question is whether or not she will go ahead with it.

Teruyuki Kagawa is gloriously creepy as Aoki, who now spends his time operating his own strange and cult-like community school out in the middle of nowhere. The episode does not spend any time exploring this school, or his weirdly calm and passive wife - a dead ringer for the girlfriend who killed herself - but there is just enough showcased to make it all seem remarkably wrong-headed and insidious.

As was the case with the preceding four episodes, "Atonement" does not end tidily or happily. It cuts off with emotions unsettled and in the air, and in a deliberately unsatisfying fashion. This is almost certainly the best episode of the series, but the question remains just how good a series this was. The tone was regularly pitch-perfect. The acting was almost universally strong. As a narrative, however, things simply did not hold together. The episodes did not significantly interrelate. By the time the story ends it is unclear what was learned or achieved. Penance has been a very weird experience.
Posted by Grant at 9:11 AM