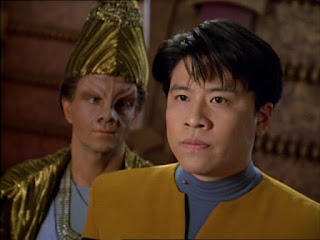 The Voyager crew discover a series of alien burial grounds inside the rings of an uninhabited planet. A transporter accident sees Ensign Kim (Garrett Wang) swap places with one of the dead aliens. While she is successfully revived on Voyager, Kim wakes to find himself transported to another dimension - where a race known as the Vhnori use vacuoles in space to transport their dead to the afterlife.

"Emanations" marks a huge improvement in script quality for Voyager. This is an episode that is intelligent, sensitively portrayed, provocative and distinctive. It is easily the best episode of Season 1 thus far. It also finally gives the spotlight to Harry Kim, a likeable character who has been poorly served by the scripts since the series pilot.

The episode begins with such an intriguing set-up. Voyager is attracted to the gas giant because sensors have detected an entirely new element. They find it is emanating from the asteroids that comprise the planet's network of rings. An away team beams down to a cave system in one of the larger asteroids, where they discover dozens of dead alien bodies covered in a strange web-like covering: the entire ring system is an alien graveyard. That's an incredible concept, and a really evocative one to see play out. The crew make the conscious decision not to interfere with the bodies out of respect for their culture, which is a genuinely nice touch. When they try to beam out, their transport signal interferes with the arrival through a 'subspace vacuole' of a fresh dead body. Chakotay (Robert Beltran) and Torres (Roxann Dawson) arrive on Voyager with the corpse, and Kim is nowhere to be seen.

From here the episode splits into two equally intriguing halves. In one, the dead alien body is successfully revived by the Doctor (Robert Picardo), and has to deal with the shock of her new environs. She was told by her culture's religious leaders that after being euthanized she would ascend to the next 'emanation' of reality and be reunited with her ancestors. Instead she is confronted with the discovery that all that actually happens is that their corpses lie in a series of asteroids in another universe. Cecile Callan plays the alien survivor, Ptera, in a highly convincing manner, and her story concludes in a way I found both unexpected and dramatically satisfying.

Over in the episode's other half, poor Harry Kim wakes up in the temple where members of the Vhnori voluntarily submit themselves to death in order for their bodies to ascend. He is not just on another planet but an entirely different reality, linked to our own universe by the unstable subspace vacuoles. Kim, of course, is desperate to find a way back. At the same time his arrival has a staggering effect on the Vhnori: he is the first-ever person to come from the afterlife to their 'real' world, and when he arrives with stories of dead bodies wrapped in feathery shrouds he has a profoundly disturbing effect on them. That effect plays out in microcosm. We never leave the funeral house at which Kim has arrived, and we see his effect through the reactions of a priest named Neria (an always-welcome Jerry Hardin), and a disabled man named Garan (Jefrey Alan Chandler) - who has agreed to die in order to lessen the burden he has placed on his family. Of course once Garan hears Kim's stories of corpses in asteroids, he begins to have second thoughts about going through with his own death.

Chandler does a remarkable job with Garan, playing out the character's doubts and worries in a very believable fashion. There is a deeply provocative element to his storyline, since he is a disabled man pressed by his family into being euthanized. While it is not against his will per se, he certainly has doubts that his wife does not appear to share. It's an interesting situation because while we can look at it and be repelled, in the context of the Vhnori culture it is a positive and loving thing to do.

Garrett Wang is excellent as Kim. He is young and still relatively insecure, and has found himself trapped in another universe without support or guidance from his superior officers. His very presence is damaging an alien culture, and the more he talks to the Vhnori the more damage he appears to do. He is desperate to escape back to his own dimension, but doing so means travelling through their 'cenotaph' machine - and that means arriving in the asteroid rings in a clinical state of death. It is all an intense, eye-opening ride for poor Kim. It is also worth noting that this is the first time he is forced to travel to another reality and die - it will not be the last time.

There are a lot of elements thrown in the air in this episode - issues of euthanasia, religion, life after death, and cultural change - and to its credit "Emanations" successfully juggles all of them well. This is the best episode of Star Trek: Voyager so far. Eight episodes in, and four have been good. Season 1's quality ratio rises to an even 50 per cent.
Posted by Grant at 5:08 PM