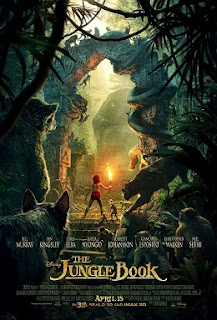 The Walt Disney Company has been enjoying some remarkable success of late by remaking their range of classic animated features as live-action films. Robert Stromberg's Maleficent (2014) re-imagined Sleeping Beauty from the point of view of its villain, and Kenneth Branagh's Cinderella (2015) offered a pleasant but traditional take on the popular fairy tale. Now Jon Favreau has adapted Rudyard Kipling's The Jungle Book - and Disney's 1967 animated version - into an all-new CGI-heavy live-action feature and it's possibly the most satisfying production of the three.

Mowgli (Neel Sethi) is a human child raised in the Indian jungle by a pack of wolves. When the jungle is visited by the human-hating and scarred tiger Shere Khan (voiced by Idris Elba), the decision is made to take Mowgli to the nearest human village. Hijinks ensue along the way, as they do, involving the lazy bear Baloo (Bill Murray), the hypnotic python Kaa (Scarlett Johansson) and the giant ape King Louie (Christopher Walken).

I think it is fair to say that The Jungle Book is a film of modest ambitions. It is produced to within an inch of its life for sute, and boasts the sorts of photo-realistic CGI animals that you will only get from a $250 million dollar budget, but narratively it is a quite simple and episodic affair much like the animated film that precedes it. Mowgli is forced to leave the jungle when his life is under threat, and he travels a bit with the panther Bagheera (Ben Kingsley), mucks around for a while with Baloo, and then gets kidnapped by monkeys before returning home for a climactic showdown with Shere Khan.

Within those shallow goals, however, the film does a remarkably fun job. The CGI animals are wonderful to watch, with plenty of moments of humour and drama. The voice cast is pretty much perfectly appointed, and play largely to type: if you try to imagine a Ben Kingsley Bagheera or a Bill Murray Baloo, you will imagine pretty much exactly what you get on screen. The film's sole live-action star Neel Sethi has a lot of screen presence and charisma, and manages to play the precocious child and the desperate protagonist in equal measure. There's a touch of Spielberg in how Jon Favreau handles Mowgli: he's put in genuine peril, and he does suffer injuries as part of his adventure.

It isn't perfect. Not only is the story a little limited but the songs - there are basically two taken out of the animated film - tread a weird middle ground, as if the film isn't quite willing to commit to being a musical but at the same time does not want to risk disappointing its nostalgic audience. The film is bursting with personality though. I found myself smiling an awful lot as it played out: a funny line here, a beautiful shot there, the arrival of a beloved childhood character every few minutes. The Walt Disney Company knows how to manufacture family entertainment, and The Jungle Book is a slickly manufactured confection indeed.

I was particularly engaged by the film's treatment of King Louie, who is re-imagined here not as a simple orangutan but as a three-metre tall prehistoric gigantopithacus. He is not designed to look cute, and indeed combined with Christopher Walken's wise-guy delivery he seems more creepy than anything else. When he subsequently bursts into song it is a rather unsettling experience: not funny enough to amuse, and not quite frightening enough to scare. I couldn't take my eyes off him.

One final realisation dawned on me, as I watched a stampede of buffalo save Mowgli from an early death in Shere Khan's jaws. With the success of Malificent, Cinderella and now The Jungle Book, Disney's photo-realistic Lion King can only be a few years away.
Posted by Grant at 7:02 AM