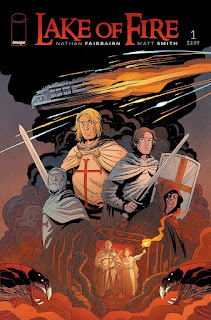 1220 AD: Theo and Hugh are two young noblemen that have set off across France - and against their mother's wishes - to join the Holy Crusade. They are promptly set on a mission to the isolated village of Montaillou, more to get them out of their commander's way than anything else. Once there they discover not heretics but demonic invaders from another place.

This whole schtick of medieval-warriors-versus-aliens has been done plenty of times before. A recent Dark Horse miniseries by Dan Abnett and I.N.J. Culbard, Dark Ages, did a great job with it. It seems like this new Image monthly is going to have an excellent stab at it as well. The characters are archetypal but remarkably well realised, while the script is clearly well researched with a fascinating grounding in the Albigensian Crusade.

This is also a great value first issue, with 44 pages of story and a higher panel count per page to keep the story pushing along for an impressive length. Matt Smith's artwork is exceptional: realistic enough to have some weight behind it, but cartoonish enough to give all of the characters a rich sense of personality. This was a hugely enjoyable issue; I will definitely continue reading. (5/5)

Under the cut: reviews of Generation Zero, ROM and Usagi Yojimbo.

Keisha Sherman is a teenager in the town of Rook, Michigan. Her boyfriend just died - the police say in an accident, but she thinks it was murder. In desperation she reaches out online to the mysterious "Generation Zero" - a cross between psychic teenage soldiers and an urban myth. This is a great first issue, combining a great script with wonderful artwork. If you're a fan of The Wicked + the Divine or Generation X by Kieron Gillen, or possibly even Grant Morrison's The Invisibles, then this is a book well worth checking out. I'm hooked and then some: this is a great debut issue, and a series with a hell of a lot of promise. (5/5)

The interstellar traveller ROM and his human companion Darby Mason remain on the run from the Dire Wraiths that have invaded the Earth and infiltrated human society. This remains a slightly frustrating read in its second issue. The comic is handsomely packaged with bright, colourful artwork, yet the story seems competent without expressing an inch of originality or flair. ROM fans - myself included - have waited a long time for the character to come back. I feel that IDW could have done something a lot more interesting than this. (2/5)

"The Secret of the Hell Screen" reaches its third and final part as Usagi is pressed to solve a murder mystery and get a temple a last-minute reprieve from becoming hunting ground for a local lord. I could write on and on about the beautiful simplicity of Stan Sakai's black and white artwork, but for me the real achievement of Usagi Yojimbo is Sakai's brilliantly efficient storytelling techniques. This mystery has been an epic by Usagi standards at three whole issues, but it has not had an ounce of fat on it. This book is faultless slick and immensely satisfying storytelling, produced month in and month out like clockwork. Readers honestly don't seem to pause to appreciate just how lucky there are. (5/5)
Posted by Grant at 10:25 PM