Five Doctor Who serials to remake 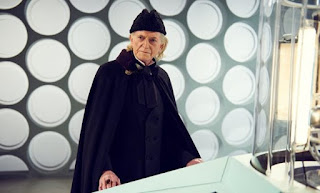 The BBC has just released publicity stills for their Lost Sitcoms project. It's a great idea. Basically, over the 1960s and 1970s the BBC Archive became over-stuffed with recordings of the broadcaster's television and radio programs and had to make room. Repeats of old programs were comparatively rare, and rights-wise they were complicated to approve, and on top of matters home video was not really a commercial concern of any kind. Seeing no great worth in keeping everything, the BBC started junking old recordings to make space.

The result of this action is that today, when historical television programs are highly valued, there are numerous gaps in old and well-loved shows. What The Lost Sitcoms is doing is remaking select episodes of famous BBC sitcoms with entirely new casts and crews but retaining the original scripts verbatim. Series featured include Hancock's Half Hour, Steptoe and Son, and Till Death Do Us Part.

Of course the thing is that if the BBC can undertake this project with their old sitcoms, there is every chance they could undertake it with dramatic works as well - and what BBC drama series is more famous, or has more notable gaps in its history than Doctor Who? So let us assume the BBC gives that a go, and remakes a single 1960s Doctor Who serial with the original script but a new cast: which serial would we nominate to return? Here are my top five picks.

#5. "The Massacre of St Bartholemew's Eve"
No episodes of this four-episode serial exist in the BBC Archives. It's a phenomenal serial, arguably one of the best ever written for Doctor Who, and that alone makes seeing it revived a tantalising prospect. It sees the Doctor and his companion Steven get separated in Paris days before a religious massacre sees several thousand people murdered. On the other hand it has far too many marks against it to be a really viable and popular remake. The Doctor himself barely appears, with William Hartnell performing the role of the lookalike Abbot of Amboise for much of the story. It is a pure historical serial, without any monsters or aliens to grab the audience's attention. Finally it is tonally about as dark as Doctor Who ever got in the 1960s, being as it is a fairly direct adaptation of a real-life attempt at genocide. I would still love to see this performed one day, or better yet the original tapes rediscovered.

#4: "The Macra Terror"
This fourth season serial featuring Patrick Troughton's Doctor is also entirely absent from the Archives. It sees the Doctor and his companions Ben, Polly and Jamie arrive on a distant planet to find the apparently-happy inhabitants under the secret control of the hidden alien Macra. It is not one of the most famous lost stories, nor is it a particularly great script. That said, it still does have a number of elements that might make it a valid choice for a 21st century re-shoot. Of my five picks it is equal shortest at four episodes, it is set in the future on an offworld human colony, and the villains of the piece are enormous angry crabs.

#3: "The Daleks' Masterplan"
The 'go big or go home' option. At 12 episodes in length, this remains Doctor Who's longest-ever discrete serial ("The Trial of a Time Lord" only counts with pedants). It regularly changes location and time period, as the Daleks chase the Doctor through the universe to retrieve the vital technology he has stolen from them. It is a feast for a popular audience, featuring multiple aliens, armies of Daleks, killer robot Mechanoids, and the original rival Time Lord the Meddling Monk. The stakes are high. Multiple companions die. On the other hand, not only is 12 episodes a bit long for budgetary reasons it is also arguably a bit long for a popular audience. How many viewers that try the first episode will still be around the watch the 12th? Other points against it: we still have two episodes of the original left in the archive, and to be blunt many of the middle episodes are not that great.

#2 "Marco Polo"
Yes it's a historical story, and might not appeal to the biggest audience, and yes it's seven episodes long and possibly a little too lengthy for the BBC's purposes, but hear me out. This serial has so many positive aspects going for it. For one thing it is the oldest missing serial in Doctor Who, originally broadcast in 1964 as part of the first season. For another it is incredibly well written, with the plot moving from post to post along the Silk Road from the Himalayas to Eastern China. Even having only heard the surviving audio recordings it is one of my favourite Doctor Who stories ever. Finally it gives the BBC a chance to use modern-day casting to great benefit: in 1964 the Chinese roles were cast with white actors in make-up. A new edition could fix that problem.

For me this is the hands-down best choice. Originally aired in 1966, it sees the Doctor recovering from his first regeneration. His companions are confused and somewhat terrified by this strange new man claiming to be the Doctor. They find themselves on a human colony on the outer fringes of our solar system. A scientist has dug up a buried capsule contained three inert Daleks and brought them back to life and servants. The Doctor knows the Daleks are planning something, but no one believes a word he says. A rebel uprising is threatening to throw the whole human population into chaos - which is when the Daleks pick their time to strike. I honestly think this is the greatest Doctor Who serial of all time - and as with "Marco Polo" that's just from the superb audio recordings. It has smart, three-dimensional characters, a fresh and unsettling Doctor, high stakes drama, and - the killer asset for any populist Doctor Who project: Daleks. It would be amazing for the BBC to revive and re-make this serial. It would make my year.
Posted by Grant at 8:18 PM