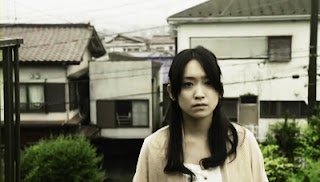 Yuka (Chizuru Ikewaki) is one of four girls who witnessed their friend Emili get abducted and murdered by a mysterious man. 15 years later she works in a flower shop. When her sister Mayu (Ayumi Ito) - with whom Yuka has long held a deep resentment - marries the credulous Keita (Tomoharu Hasegawa), Yuka goes out of her way to destroy their marriage.

One of the most positive aspects of Kiyoshi Kurosawa's five-part TV series Penance is how varied the tone and content of the episodes have been. The set-up for the four protagonists has been identical: they witness a murder as children, fail to identify a suspect, and are subsequently warned by the victim's grieving mother Asako (Kyoko Koizumi) that they will have to one day pay a 'penance' for their failure. Each episode so far has effectively ended in failure for its protagonist - two murders and one accidental death - but the tone and narrative of each episode had been quite different. "Ten Months, Ten Days" follows in much the same fashion. Once again there is a body count, and once again the tone and narrative is distinct from all of the others.

The episode's early scenes reveal an unexpectedly sad childhood for Yuka. Her sister Mayu is sickly and bedridden, and as such has become almost the sole focus on their mother's attentions. When Yuka begs her mother for a Barbie doll she is fobbed off and ignored. As soon as the mother is out of the room Mayu gloats that she is going to ask for the doll herself: she luxuriates in getting whatever she wants while Yuka goes with none. At the same time she grows obsessed with a local police officer, and makes up every excuse she can to go and speak with him - including bringing in a 10 yen coin she found on the street, in case someone comes looking for it. When the officer is unexpectedly transferred, young Yuka is heartbroken. 15 years later: Yuka reunites with her sister, only to discover that Mayu's new husband is a civil servant working for the police department. Believing it to be yet another case of Mayu taking whatever Yuka wants, Yuka sets off to seduce her new brother-in-law and destroy her sister's marriage.

The episode does a fairly solid job of balancing dark comedy with drama, as Yuka continually - and fruitlessly - tries to get the attention of Keita, who remains too naive to recognise when someone is hitting on him. As with the previous three episodes, Yuka's efforts do not end happily.

Yuka is a strikingly different character to her friends though: unlike them she never felt guilt over failing to identify Emili's killer. She never took Asako's threats seriously. When, as she has done every episode, Asako arrives to see whether not Yuka has paid a sufficient penance, Yuka is not remotely regretful or intimidated. It makes for a nice contrast. Ikewaki plays the role very well. In her hands Yuka seems bright and breezy, but there's a particularly mean-spirited woman hiding just under the surface. Perversely she is probably the most unlikeable protagonist in the whole series.

The constant shifts in style from episode to episode act as a double-edged sword. On the one hand it had made Penance a fascinating and quite original series. On the other it has made it an often-times frustrating watch, since each episode does not seem properly connected to any of the others. The action has all exploded out from the one violent tragedy, but from there each woman has followed her own storyline and agenda. It feels like it is breaking a rule of narrative television, with the inciting incident of Emili's death acting solely as a springboard and not actually tying anything together or getting closer to identifying her killer. A last-minute revelation in this episode actually does set Asako off on her way to confront her daughter's murderer - it feels strange that it has taken so many episodes to move forward. At this stage there is only one left.
Posted by Grant at 7:31 AM