Star Trek: The Next Generation: "Conundrum" 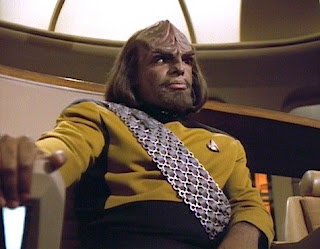 It is 17 February 1992, and time for another episode of Star Trek: The Next Generation.

The USS Enterprise encounters an alien probe whose scans somehow erase the memories of the entire crew. Now, without memories of their names, their roles or even their real purpose, the crew find themselves thrown into the final stages of a war between the Federation and the alien species whose probe removed their memories in the first place.

"Conundrum" is a wonderfully clever episode of The Next Generation, combining a great twisting narrative with some perfectly-placed moments of comedy. It benefits enormously from a great basic premise - the characters all having their memories wiped clean - and then exploits that premise for reasons of surprise, drama, comedy and character development.

There is a lot of really clever stuff going on this episode. I think my favourite is the wonderful manner in which the episode drops in an entirely new member of the bridge crew without signposting it from the beginning. When everybody loses their memory, the bridge crew take a moment to realise exactly what has happened. Picard (Patrick Stewart) is confused, Riker (Jonathan Frakes) is confused, the anonymous helmsman is confused. When they eventually work their way into personnel records to learn their own names and roles, it turns out the helmsman is actually the ship's executive officer Commander Keiran McDuff (Erich Anderson). As viewers we know there is no such crew member, but of course the amnesiac crew have no idea. The episode then becomes an increasingly tense one as we watch the crew grow ever closer to learning McDuff's secret while also trying to work out exactly who he is and what his motives are.

The episode also exploits the potential of character interactions when nobody has their memories. Data (Brent Spiner) and La Forge (LeVar Burton) share a wonderful scene discussing Data's possible origins and identity as an artificial being. Troi (Marina Sirtis) continues to be affected by her empathic powers despite her amnesia - intellectually she has no idea what has happened, but emotionally she knows the Enterprise's mission is wrong. When the crew attempt to work out from their rank insignia who is in charge, Worf points to his Klingon baldric and assumes command of the ship.

The best is saved for Riker and Ensign Ro (Michelle Forbes). At the episode's outset, he is once again upbraiding her for her arrogance and defiance of authority. Once their memories have been taken they are almost immediately in bed with one another, kicking off an instinctive and passionate love affair. When the dust has cleared and their memories have returned, all that is left is awkwardness and embarassment on Riker's part and a lovely sort of smirking mockery from Ro and Troi. It is beautifully written and played. Ro is a great character who adds some much needed interpersonal conflict to the series. The idea of her and Riker hooking up in not only hilarious to watch, it also makes an unexpected and perfect sort of sense.

This is the sort of episode that Star Trek does best: a neat idea played with and exploited for every possible angle and trick. It is one of the most satisfying episodes of the season thus far, and marks the 10th good episode out of 14. The quality ratio rises to 71 per cent.
Posted by Grant at 7:07 AM