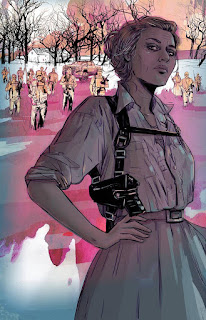 Grace Briggs is the middle-aged mother of three sons, and the wife of a racist, anti-government secessionist leader currently serving a life sentence in prison - and she has just told her husband that she is taking over his family business.

Briggs Land is the latest comic series from writer Brian Wood. It retains the very high quality of mature, intelligent writing I have come to expect from his work, which has included some great ongoing books including Rebels, Northlanders, Black Road and The Massive. If the quality of this book continues in the same way it goes with this first issue, I think Wood has another great book in the making.

It is provocative stuff in some ways, since he is basing his story around an extended family of anti-government isolationists, many of whom are openly racist and at least one of whom is a self-proclaimed and proud Nazi. Despite the challenge, he manages to isolate the more likeable characters within the group and make the story about them. Mack Chater's artwork is excellent and adds to the grounded, realistic tone. Lee Loughridge's colours are, as always, excellent. I'll be keeping up with this book as it goes: it has huge potential. (4/5)

Under the cut: reviews of Aquaman, Doctor Who, and Green Arrow.

With Atlantis and the USA on the edge of military conflict, Mera breaks Aquaman out of US custody - leading to a pitched rolling fight around Washington D.C. as the order is given to the army to shoot to kill. This is a great action-based issue that manages to entertain as well as give a really strong sense of just how perilous the situation has become. It is also the perfect sort of superhero comic, in that it fills in new readers with the necessary info to follow the story, while also referring back to earlier storylines to satisfy the ongoing readership. Philippe Briones' artwork seems to be getting stronger as he goes as well; it really is becoming quite excellent. (4/5)

Doctor Who: Supremacy of the Cybermen #2

Complete unadulterated fan pornography. The Cybermen have managed to take over the universe across all time zones, meaning the 9th Doctor is facing Cybermen on contemporary Earth, the 10th is joining forces with the Sontarans to defend the remaining pockets of the galaxy, the 11th is back escaping Cyber-Silurians, the the 12th is arguing with a Cyber-converted Rassilon on an invaded Gallifrey. It all has a certain amount of entertainment value - I particularly liked Rassilon's bowship - but if you're after an actual story beyond continuity references and cameos you are going to be out of luck. I also was not particularly sold on the artwork by Rodrigeuz and Geovanni. (2/5)

Benjamin Percy's first story arc reaches its climax as Oliver and Diggle storm the Ninth Gate organisation to rescue Black Canary and retrieve Oliver's fortune. I mentioned when reviewing the last issue what a wonderful concept the Ninth Gate were - a hell-themed supervillain bank - and this issue just cements that opinion. I cannot believe we won't be seeing them again. Ferreyra's artwork is richly coloured and effective. It's a great action-packed finale with a nice hook to lead into the next issue. Green Arrow has consistently impressed since Rebirth - I give it my strong recommendation. (4/5)
Posted by Grant at 5:43 PM