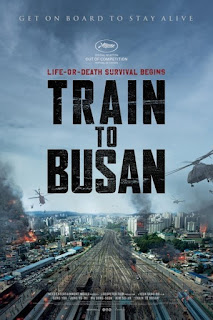 Seok-woo is an office-bound Korean workaholic in the middle of an unpleasant divorce from his wife. Seok-woo's daughter Su-an (Kim Su-an) is not handling the separation well, and for her birthday persuades him to escort her on the train from Seoul to Busan. On the same day a virulent zombie outbreak spreads across Korea - including onto the train. Now Seok-woo, Su-an and a shrinking group of passengers must fight to stay alive until the train reaches its final destination.

Generally speaking, Asian films do not go too well with English-speaking audiences. Occasionally a film will break out and actually get a theatrical run in the USA, or the United Kingdom, or Australia. These outliers are usually representative of the most effective and crowd-pleasing films the continent has to offer, including films such as Crouching Tiger Hidden Dragon, Hero, Shall We Dance, or The Host. Yeon Sang-ho's new zombie thriller Train to Busan is the latest film to join that list. It has already been a massive hit in its own country, and is receiving a proper cinema release in both the USA and Australia. If you are not a fan of zombies, then this is categorically not a film for you. If you are an enthusiast for all things undead and hungry, then rest assured this is the best zombie film in years; probably the best since Danny Boyle remixed the genre with 28 Days Later.

The wonderful thing about zombie movies is that they form a long, developing chain. Succeeding films take inspiration from their predecessors. If one particular theme or image works for one director, subsequent filmmakers will co-opt, develop and lay tribute in their own films. That was certainly the case with 28 Days Later, which replaced the shambling inevitable zombie hordes with frantic, terrifyingly violent versions that would sprint down the street in pursuit of any hapless humans still living. Marc Forster's World War Z picked up the speedy zombies and had them swarm in hordes, climbing over one another in enormous piles of limbs and teeth. Yeon takes from both earlier films, and then confines the bulk of the action to a single passenger train. He also draws together the random assortment of strangers forced to barricade themselves in from the zombies, as made famous by zombie maestro George A. Romero.

So what does Yeon contribute to these pre-existing tropes? For one thing he brings a distinctly Korean sensibility to the genre, which means over-the-top emotion and anguish, as well as a pretty severe taste in which characters should die and in which order. There are a few characters whose archetypes are clearly out of bounds for a populist horror movie, but beyond that it really does feel like open season. Yeon also adds some nice new quirks to his zombies, some of which enable the characters to unexpectedly get out of seemingly hopeless situations.

He also does an amazing job of varying the tension and action of the film, despite it mostly being set inside a series of train carriages. The film runs for about two hours, but it is so well structured and paced that if feels significantly shorter. Unlike most Hollywood films of recent years, it also knows when to pull out of the story and roll to credits.

Yeon clearly gets that no matter how many zombies or scary moments he throws into his film, it would fail to attract a mainstream audience without engaging characters. Train to Busan excels in this regard. Seok-woo is an imperfect person: he is self-centred and neglects his daughter, and it is over the course of the film that he manages to start changing that. Kim Su-an is great as his daughter, with a strong presence and a hell of a set of lungs on her. The real stand-out of the film is Ma Dong-seok as Sang-hwa, an obnoxious and boisterous stranger who fiercely protects his pregnant wife and calls Seok-woo out on many of his early acts of self-interest. Ma treads a really clever line here, showing genuine heart and emotion in fighting the zombies but also being one of the film's funniest assets by far. He is simply wonderful to watch.

It could be argued that Train to Busan does not quite find enough original elements to work, but that would mean ignoring its other wonderful virtues including a beautifully structured and written screenplay, great cinematography and editing, likeable characters and some of the best horror-based action scenes in many years. There is a reason it is getting such a widespread international release: it deserves it. This is one of the best horror films I have seen in ages.
Posted by Grant at 10:51 AM