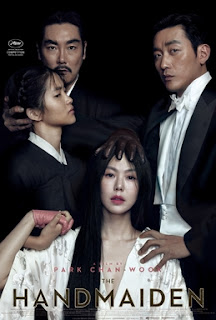 In 1930s Korea a pickpocket named Sook-hee (Kim Tae-ri) is persuaded by the deceitful Count Fujiwara (Ha Jung-woo) to masquerade as a maid to a rich, disaffected heiress named Hideko (Kim Min-hee), in order to help him defraud her of her fortune. Fujiawara's master plan hits a snag, however, when Sook-hee and Hideko begin to fall in love.

In many respects, The Handmaiden is a wonderful oddity. It is the latest film by the internationally acclaimed filmmaker Park Chan-wook, whose previous films - including Oldboy, JSA: Joint Security Area, and Sympathy for Mr Vengeance - have established him a major creative force in his own country and a cult favourite internationally. This new film is an adaptation of the similarly acclaimed English-language novel Fingersmith, by Welsh author Sarah Waters. While the novel was set in 19th century England, Park has relocated the action of 1930s Korea: a country occupied by the Japanese, and where aspiring rich aesthetes seem more interesting in adopting Japanese language and culture than in defending their own heritage.

This film is a genuine surprise, in fact it is one of those films best viewed with as little knowledge about its storyline as possible. What I can say is that it is one of the best films I have seen this year, and showcases one of the world's most talented directors at the height of his powers.

The film's storyline is superb, throwing in numerous unexpected shifts in the plot. They are perfectly designed to not only come as a surprise when they snake into a new direction, but to leave behind evidence in advance at the same time. A canny viewer could guess what was secretly going on, but I suspect most viewers will be happy enough to be drawn where the film leads them and be delighted by the surprises along the way. I have not read Waters' novel, but based on a synopsis of it it seems Park has streamlined its labyrinthine plot marvellously. He also not only justifies its new setting but leverages it to tremendous advantage. The film blends its Korean and Japanese influences deftly, to the point where they are colour-coded in the English subtitles so as to ensure the subtle choices in why some lines are in one language and others in another remain clear.

The film more than justifies its description as an erotic thriller, not only through a series of sexual encounters between its two leads - and they seem to sit just on the right side of the male gaze - but through its sensual pacing and photography, and rich set and costume design. In true Park style some sexual elements in the film get pushed far beyond eroticism and into a creepy sort of grotesquerie. In fact despite its historical setting and initially classical style there is a lot more of Park's typically disturbing style in The Handmaiden than first appears. The plot suddenly shifts tonally at the halfway point, and a climactic scene in a mansion basement pretty much allows the film to sit quite comfortably alongside several of Park's more challenging works.

The film is beautifully photographed by regular Park collaborator Chung Chung-hoon. It captures the beauty of the set and the actors perfectly. In visual terms I am not sure one of Park's films has ever looked better.

Kim Tae-ri is excellent as Sook-hee, giving her character a lot of strength and depth. Kim Min-hee is striking as Hideko, whose intentions remain near-impenetrable for much of the film. Ha Jung-woo brings a lot of humour to his role as the Count, while Cho Jin-woong is marvellously unpleasant as Hideko's scheming, perverted uncle Kouzuki.

If there is a major criticism to be made, it is that the film takes a little too long to pull out at its climax and denouement. Too many scenes end on a note that seems perfect to cut to credits, but then cut to another epilogue instead. It ultimately remains satisfying, but it does drag a little at the same time. In all honesty it would likely be fixed by removing the final scene only: it is yet another sex scene, and likely the least effective and most purient of the lot. It is a small shame for a film to do such amazing work, only to fail to stick the landing.

Still, a flawed masterpiece is still a masterpiece where it counts. The Handmaiden sits comfortably alongside Park's best work. It is a suspenseful maze well worth entering.
Posted by Grant at 7:05 AM