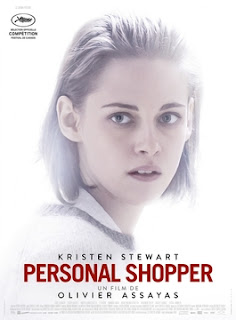 Maureen (Kristen Stewart) is a 28 year-old American living in Paris. During the day she works as a personal shopper for a rich celebrity named Kyra (Nora von Waldstätten). In her own time she obsesses over her recently deceased twin brother Lewis, and his promise to try and contact her from beyond the grave if he died. It is not long before something seems to be making contact, but whether it is her brother, her imagination or something altogether darker remains to be seen.

Personal Shopper is a horror film by stealth. It comes from acclaimed French director Olivier Assayas via the Cannes Film Festival, where it ran in contention for the prestigious Palme d'Or. At a glance it appears to be a typical French drama, with sullen overwrought emotion and privileged type complaining incessantly about their luxurious lives. Instead it is one of the best supernatural thrillers of recent years, and it has an alarming tendency to creep up on you and give one hell of a surprise.

The film employs a wonderful slow burn, taking its time to establish Maureen, her job and her day-to-day life. She has a job that is simultaneously easy, well-paid and utterly demeaning. Each day she goes to expensive fashion stores and jewellers to select and pay for expensive couture outfits that her employer then wears at society parties, fashion festivals and red carpet events. The job might be bearable if her employer was a nice person, but she isn't: Von Waldstätten gives a brief but wonderfully unlikeable performance as the worst kind of high society diva.

The first trace of a supernatural element comes quite quickly, but like much of the film it is remarkably subtle. Maureen clearly wants to believe that there is something reaching out from beyond the grave, but there is always the chance that whatever she thinks is contacting her in entirely in her own head. When whatever is contacting her starts to converse via text messaging, another ambiguous possibility opens itself: that there may be a real person stalking her. The film keeps its secrets very close to its chest, gradually developing Personal Shopper into a supremely tense little thriller. There are a lot of layers interweaved throughout the film, combining all kinds of thrillers together: some supernatural, some psychological, some erotic, and all mixed in and out until it's difficult to tease out precisely what is happening. Some viewers are going to find the ambiguity infuriating: I thought it was one of the film's greatest strengths.

Kristen Stewart is utterly remarkable as Maureen, presenting a depth and an intensity I have not previously seen her deliver. I have not seen The Clouds of Sils Maria, her previous collaboration with Assayas that won her a Cesar award, but based on her performance here I am very keen to do so. It looks as if skipping Hollywood to work in France was the best career move of her life.

Olivier Assayas has crafted a challenging but deeply effective film. It uses a minimal musical score, really only present in transitions between scenes. Without the music the entire environment seems much more realistic - almost banal - and the film's most frightening moments thus take on a much deeper intensity. The slow, measured photography is wonderful too, with careful movements and clever framing. Assayas clearly knows how to frame supernatural horror too, and the fact that he shows such restraint in presenting that horror makes this exceptional film all the stronger.
Posted by Grant at 7:40 AM