Babylon 5: The Legend of the Rangers: "To Live and Die by Starlight" 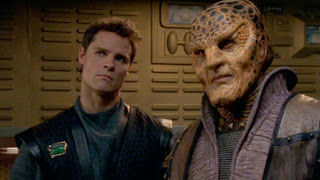 Human Ranger David Martell (Dylan Neal) orders a retreat during a pitched space battle, breaking a cardinal rule of the Rangers - to never retreat in the face of the enemy. Rather than get exiled from the order entirely, he is assigned the command of a decrepit and potentially haunted starship and give escort duty for a group of ambassadors on their way to a conference. The convoy is attacked, putting the lives of all the ambassadors in Martell's hands and revealing a new alien menace that threatens the entire galaxy.

Babylon 5 ran for five years 110 episodes. Its follow-up, Crusade, lasted only one season of 13 episodes. J. Michael Straczynski's third attempt for a Babylon 5 series lasted just under 90 minutes. I feel there is a law of diminishing returns to this franchise. The Legend of the Rangers was a 2002 TV movie produced as a pilot to an intended ongoing series for the Sci-Fi Channel, but of course no such series ultimately eventuated. Having watched its sole episode, I am not entirely surprised.

You can see this pilot straining to accommodate a younger audience, with its younger cast of characters and a much more action-focused storyline. It also includes a lot more traditional Babylon 5 aliens - the lead cast includes a pair of Minbari, a Narn and a Drazi, for example - that helps to make it feel a much closer sort of cousin to Babylon 5 than Crusade ever managed. Sadly whatever kind of complexity existed in the parent series did not get inherited by the new offspring: the Rangers for one are now a weirdly inflexible and belligerent lot without much in the way of depth or varied personalities. It is all a bit prequel-era Jedi Order, quite frankly. They even have their own semi-anonymous creepy council who meet in a visually similar fashion to the Minbari's disbanded Grey Council - so similar, in fact, that I was strained to remember if somehow this was the Grey Council re-formed in secret.

The new characters are weakly developed cyphers, although there is clearly a chance some of them could have become better developed had a subsequent series eventuated. The one standout is Dulann (Alex Zahara), a Minbari telepath serving as Martell's first officer. He is rather reminiscent of Bill Mumy's performance as Babylon 5's Lennier, but with a much more relaxed and self-confident nature. As for the rest of the cast, they are easily over-shadowed by Andreas Katsulas' reprise of fan favourite character G'Kar. Watching Katsulas is almost always a pleasure, and here he does get his best material since Babylon 5's fourth season. It is also sadly his final performance in the role - Katsulas himself died four years later.

The setting of the TV movie is the beaten-up starship Liandra, which has the silliest weapons controls I have seen in a science fiction text. A gunner dives down a tube, and into a sort of floating virtual reality chamber, in which they can see all around the ship. They fire the guns by punching and kicking; clearly someone thought this was going to be a visually dynamic way of showing off space battles, but instead it just seems a ridiculously inefficient way to pull a trigger.

The main plot is very simple - I suspect deliberately so - and sees a convoy of alien diplomats and ambassadors come under attack by a mysterious new foe. Straczynski drops in two plot threads for a future series to develop. The first is the question of how the Liandra is haunted by its former crew and what happened to them. The second is the identity of this new alien menace - the Hand - and how the Interstellar Alliance fights back. It is this second one that feels a little weak: Babylon 5 already did much the same story with the Shadows, and in the cast of the Hand they feel much, much too similar to the all-powerful civilization included in the TV movie Thirdspace.

In the end, "To Live and Die in Starlight" is fluff. It is inoffensive fluff, but still a long way from the sort of television Babylon 5 was managing at its height. Certainly it shows a lot more long-term promise than Crusade did, and it's perhaps a small pity that it failed to get picked up for a season. As it stands it is simply a weird little curiosity: probably the least essential part of the broader Babylon 5 franchise, and just a worth missing as it is tracked down.
Posted by Grant at 5:09 PM