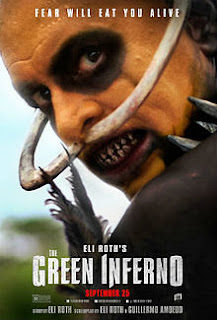 A group of idealistic activists head into the Peruvian Amazon to save an indigenous tribe from an illegal logging operation - only to become targeted by the tribe itself.

I was a big fan of Cabin Fever, Eli Roth's bleak 2002 body horror film about a group of clueless college students who get infected with a flesh-eating virus while camping in the woods. It was a bold film, and remarkably graphic, but with a real visual and tonal flair that made it seem as if Roth was a really fresh talent to watch. I was much less impressed by his 2005 follow-up Hostel, which featured more gore but seemingly less flair. His 2007 sequel Hostel Part II was perhaps a little better, but the potential shown by that first feature did not seem to have led anywhere worthwhile.

The Green Inferno is Roth's fourth feature film as director, and sadly continues his downward trajectory as a filmmaker. The gore of his earlier works remains, but the flair and style seems to have entirely evaporated. This is a weakly developed, intellectually lazy and to be honest mildly offensive film that - for me at least - puts the nail in the coffin for Roth's long-term chances. His career started with merit, but wherever it goes from here I suspect I won't be following.

The film, which is named after the movie getting shot in Ruggero Deodato's Cannibal Holocaust (1980), begins with a naive college student named Justine (Lorenza Izzo) getting tempted to join an activist group about to fly to Peru to protest an illegal logging operation that is going to destroy the habitat of a previously-uncontacted indigenous tribe. It is an opening act filled with in-your-face foreshadowing and remarkably weak dialogue and characterisation. Things pick up a little when the activists actually reach the logging site, and discover just how far the loggers are prepared to go to defend their operation: guns are aimed at heads and people almost die. It is a relief to find some authentic tension in the film, and for a few scenes at least it really lifts the characterisation and depth.

Then their plane crashes in the jungle and the survivors are captured by the very tribe they came to Peru to protect. They turn out to be bloodthirsty and torturous cannibals, at which point the film partially descends into the 'torture porn' violence that made Hostel and its sequel such notorious films upon release. The violence here is less shocking, in part because much of it is so unconvincingly realised. Intrusive music by Manuel Riviero punctuates far too much of the action: even a scene of a character feeling sick and having to defecate is accompanied by a strident horror score. It renders the scene even more farcical than it already was.

Like most films of this type, the bulk of the action boils down to waiting for each of the lead characters to suffer a gruesome death in turn. While it would be easy to criticise the film's racist depiction of indigenous Peruvians (in truth not one known tribe in the Peruvian Amazon engages in cannibalism) or its leering and unpleasant male gaze (one prolonged sequence threatens a naked and tied-up woman with having her genitals mutilated), to be honest it's greatest crime is that it is an extreme horror film that is actually quite boring. I found myself watching it simply to see who lived and died, it having achieved the bare minimum of interest for me to follow it through to the end.

The premise of The Green Inferno does contain a potentially great movie. It is a shame that Roth never managed to find it. This is a genuinely awful film.
Posted by Grant at 7:47 AM